A commercial electronic health record vendor has filed a lawsuit against the Department of Veterans Affairs alleging that Secretary David Shulkin broke federal contracting laws by issuing a sole-source justification to contract with Cerner for the modernization of VA’s EHR system.

San Diego-based CliniComp International, Inc. says the VA violated the Competition in Contracting Act of 1978, among other federal regulations, in choosing Cerner for its EHR modernization without openly competing the procurement.

“[T]he VA’s decision to award a sole source contract to Cerner is arbitrary, capricious, an abuse of discretion, and violates the [Competition in Contracting Act] and Federal Acquisition Regulations,” CliniComp’s complaint alleges.

But CliniComp, which currently holds smaller EHR contracts with the VA and DOD, argues in its complaint that the VA has time to openly compete the contract — because it will still take up to eight months to negotiate the sole-source contract, according to VA officials — and that it’s in the public’s best interest.

“In the six or eight months to negotiate a sole source contract with Cerner, the VA could hold an accelerated full and open competition for the next generation EHR,” reads CliniComp’s complaint to the U.S. Court of Federal Claims.

Also, CliniComp argues that “Since the next generation EHR is high risk and because multiple award development contracts are proven means to reduce risks, the failure of Secretary Shulkin’s decision to consider prudent risk reduction renders the sole source decision unreasonable.”

Similarly, the company says the VA violated the Office of Management and Budget’s Circular A-130 by not considering commercially available alternatives to Cerner.

CliniComp says it initially filed an agency-level protest contesting the award soon after Shulkin’s announcement, but the department dismissed that claim earlier in August. 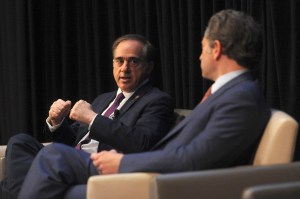