Speaking to ATARC members Wednesday, Corey Stambaugh said it will take one or two more years to move talent through the pipeline given the five NQISRCs were only established in the past two years.

A McKinsey & Co. report found there were 851 quantum technology job postings nationally in December compared with 290 Master’s-level graduates in the field annually, and demand may reach about 10,000 workers by 2025. Looking to close the gap, the Department of Energy leveraged the $625 million it received in the National Quantum Initiative Act to obtain $340 million in matching funds from industry and universities for the NQISRCs, and already their ecosystem includes researchers from about 70 institutions.

“We’re going to see more people entering the pipeline just from that initial investment,” Stambaugh, whose office resides within the White House Office of Science and Technology Policy, said.

“The centers have taken a multipronged approach to train the next generation of QIS scientists and researchers and to create new pipelines for underrepresented groups,” said Irfan Siddiqi, director of the Quantum Systems Accelerator (QSA), in a statement. ​“We’re all putting forth special efforts to support a diverse quantum workforce in a fast-growing field.”

OSTP aims to translate QIS from agency and industry labs to the market, which goes beyond the development of quantum computers and sensors with agencies, Stambaugh said.

“Applications are really going to be what makes or breaks the field,” Stambaugh said. “So are we finding the real applications that’ll benefit society and continue to justify investment.”

At the same time, the White House has cautioned against agencies transitioning before the National Institute of Standards and Technology has finished issuing a post-quantum cryptography standard. Stambaugh took that a step further, saying agencies may even need to wait until NIST’s standards are internationally recognized by standards developing organizations like the Institute of Electrical and Electronics Engineers.

The National Quantum Initiative plans to release its third-ever supplement to a president’s budget proposal soon.

“We need a whole-of-government and society strategy to harness the economic, security and scientific benefits. We need to be investing in R&D,” Stambaugh said. “We need to continue to foster this next generation of scientists and engineers in the workforce, and partnerships both domestic and international are going to be critical to that.” 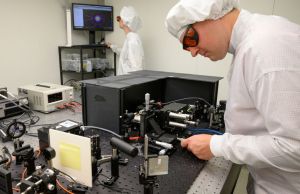