The Air Force took a major step in setting up the acquisition system to field its futuristic Advanced Battle Management System (ABMS) by establishing its own program executive office.

With a PEO —a military office responsible for the acquisition and management of a program — overseeing it, ABMS could begin buying new technology to support the system within a year, Will Roper, the Air Force’s head of acquisition and technology, said Tuesday during a press briefing.

ABMS is the Air Force’s technical backbone for the military’s Joint All Domain Command and Control (JADC2) concept. The idea is to connect “every sensor to every shooter,” or be able to send any type of data across military networks to improve the speed of decision making. Roper describes it as a “military Internet of Things.” Eventually, it will use artificial intelligence to process data sent across military networks, military officials have said.

This development comes as Congress has shown some skepticism about the Air Force’s non-traditional acquisition strategy of starting without a PEO and shunning a typical requirements-driven playbook. The latest draft of defense appropriations legislation suggests the Senate doesn’t want to fully fund the Air Force’s ABMS request, citing its hesitancy over acquisition strategy.

“I am very happy with these questions coming from Congress,” Roper said, adding that he sees it as progress that Congress is asking questions on the specifics of the program’s execution versus why it is even pursuing the technology at all. “Congress is not questioning how we are going to do this … I am getting, ‘Let’s talk about your [acquisition] baselines,'” he said.

The PEO will work with ABMS’s chief architect to implement its acquisition strategy. The PEO will have strategy-level authorities and the architect’s office will work on the technical requirements to make the implementation operative. The PEO will be unique in that it will serve as a cross-cutting team that can purchase different types of technology and work with other PEOs to sustain ABMS, which will require many types of technology from cloud computing to mobile mesh networks.

“The acquisition system that we have inherited … does not deal well with cross-cutting capabilities,” Roper said.

Despite Congress’ concerns, Roper has consistently said ABMS will need to take a new, more free-formed approach to acquisition since it’s the first project of its kind to build a military Internet of Things-like framework. But without funding from Congress, little of its work can continue.

“This is telling me they still haven’t completely made their case to Congress,” Lindsey Sheppard, an international security fellow at the Center for Strategic and International Studies, told FedScoop in regard to the most recent proposed appropriations. She added that other emerging technology applications are receiving similar skepticism from legislators.

Roper maintains that this move to form a PEO is not a direct response to congressional concerns, but a natural part of the program’s evolution. 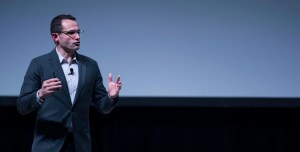