The American Federation of Government Employees has filed an unfair labor practice complaint against the Equal Employment Opportunities Commission over the return of staff to the office.

According to the union, the department last Thursday notified employees they would start to return to in-person work on May 16 without sufficient bargaining.

The charge is the latest in a series between employees and agency leaders over the end of telework, in which the provision of resources including workplace technology has become a sticking point. Earlier this month, FedScoop reported on tensions over the provision of legacy technology in negotiations between staff, union representatives and leaders at the Office of Personnel Management.

Under the return-to-office plans, bargaining unit employees will join the approximately 650 non-bargaining unit EEOC employees who have already returned to the EEOC’s offices. It is understood EEOC gave AFGE just 30 minutes’ notice before notifying staff of the return to office date.

The charge are the latest in a series of disputes between federal employees and agency leaders over the return to the office. Earlier this month, FedScoop reported on tensions between staff, union representatives and leaders at the Office of Personnel Management, where AFGE has so far filed 13 unfair labor practice complaints.

Under current plans, EEOC employees would be required to return to the office one day a week for the next 30 days. After the first month, staff must be in the office two days a week, even if they do not carry out public-facing roles unless they have received an accommodation or a temporary deferral of reentry due to a pandemic-related hardship.

In its complaint, AFGE said: “By its actions, the agency is interfering with, restraining, and coercing the exclusive representative in its ability to represent EEOC bargaining unit. An agency is required to avoid implementing changes while the negotiation process proceeds to final resolution.”

“The union rejects the possibility of post-implementation bargaining. The union requests the agency cease and desist the unilateral implementation of their reentry plan,” the council added. “The status quo must be maintained and bargain unit employees working conditions, including 100% telework should not change until the parties have reached agreement or bargaining obligations have been met per the statute.”

She added: “This action by the agency is already causing chaos by upending the safe and orderly processes that the union was in the midst of bargaining when the agency instead short-circuited negotiations. EEOC’s rogue conduct is contrary to the administration’s directions to bargain reentry and its commitment to collective bargaining.”

Under federal labor law, agencies must bargain over any intended changes to contracts with union employees. In an executive order issued in April last year, President Biden stated that it is the policy of the U.S. to encourage worker organizing and collective bargaining and that the federal government should use its “full authority” to promote and support workers organizing unions.

In a statement to FedScoop, EEOC said it had so fair bargained with AFGE in good faith and that it would continue to do so. “Despite making progress during months of dialogue about return to work and lengthy formal collective bargaining negotiations with the EEOC’s union, we have been unable to resolve several key issues,” it added.

“These issues are primarily related to the EEOC’s ability to serve the public in person during intake, mediation, hearings and other mission-critical operations; the number of days employees need to report to the office per week; and the length of time before employees need to begin reentry,” the office said. “We remain committed to seeking an agreement with the union and look forward to continuing our ongoing discussions regarding the impact and implementation of the EEOC’s Reentry Plan on the bargaining unit employees.” 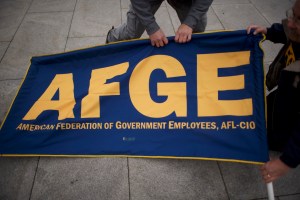