Congress should double research and development spending on artificial intelligence in fiscal 2021 and then double it once again the following year, according to new recommendations from an independent commission on America’s development of AI.

The National Security Commission on Artificial Intelligence issued a quarterly report Wednesday with 43 recommendations to the legislative and executive branches that are “in the most need of immediate attention, ripe for action, or foundational to AI and national security issues.”

The commission was mandated by the 2018 National Defense Authorization Act to “consider the methods and means necessary to advance the development of artificial intelligence, machine learning, and associated technologies to comprehensively address the national security and defense needs of the United States.” It issued its first interim report to Congress last November.

Top of that list, the commission calls for an immediate doubling of funding for non-defense R&D around AI starting next fiscal year. Though many agencies in that space don’t directly serve national security missions, the commission argues that it’s a national security risk for the nation to fall behind in its development of AI capabilities, even in non-defense areas.

“We believe that we are probably in the lead in global R&D. But we’re being pressed very hard by a number of competitors. And we need to increase our spending,” Bob Work, former deputy secretary of Defense and the vice chairman of the NSCAI, told reporters Wednesday. “You will see in our recommendations that are we focused primarily on non-defense R&D in this first quarter. And we will turn our attention to defense R&D in the coming quarters.”

Because the funding in fiscal 2021 is already “rather set,” achieving that is probably “going to require some reprogramming,” Work said. Despite that, the recommendation says: “This funding should increase agency topline levels, not repurpose funds from within existing agency budgets, and be used by agencies to fund new research and initiatives, not to support re-labeled existing efforts.”

The recommendation is more ambitious that the White House’s goal of doubling AI R&D by 2022. Instead, the commission calls for a doubling in 2021, and then doubling that number the following year again “until we have the right level of spending to maintain our lead in R&D,” Work said.

Eric Schmidt, former Google CEO and the chairman of the commission, said the importance of this increased funding is more apparent than ever as the nation struggles to fend off the coronavirus pandemic.

“I think our recommendation of doubling AI and doubling it again is probably even more important” now, Schmidt said of how the commission is thinking of the pandemic. “And the reason is that virtually all of the interesting medical approaches that I’m familiar with, are using AI techniques to look at essentially the targets of the virus. So I think you know, the way the biology works is that they run large numbers of assays and we try different things. And these new algorithms, they’ll give them a better way of targeting where those assays go.”

Schmidt said this report doesn’t cover the pandemic, but said such an action would have an “indirect benefit” on fighting COVID-19. The commission will take to focusing on the virus over the next few months for its next quarterly report, he said.

In addition to boosting non-defense AI spending, the commission in the new report calls for the DOD’s Joint Artificial Intelligence Center to report directly to the secretary, expand the cyber excepted service, create mandatory AI training at some agencies and enhance the technological infrastructure across the federal government and the nation.

On the release of the new report, Schmidt said: “We wanted to time this so that the congressional staff and the people who care about this would have our recommendations to base their thinking on. These are just recommendations. We don’t have the force of law, but we have a lot of reasons to think that people will follow them or at least come very close to our recommendations.” 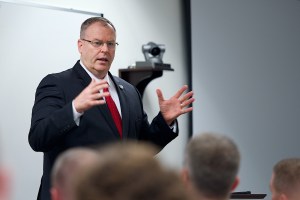 Federal R&D spending on AI should be doubled, then doubled again, commission says