The Air Force is pursuing an Advanced Battle Management System (ABMS) architecture to better link sensors and shooters on the battlefield. As part of that effort, the service is trying to find ways to connect different platforms to its data networks without breaking the bank.

Some platforms will be easier to integrate into ABMS than others, noted Air Force Chief of Staff Gen. Charles “CQ” Brown Jr.

“When you look at some of our weapon systems, they were all developed at different times. Some of them were developed before the internet was a thing. And so how do you then make something backward compatible? In that lies part of our challenge. And then how much do you invest? And if you’ve got to buy — if it’s a radio, a piece of hardware, if you’ve got to buy one for every single airplane that gets pretty expensive. And so that’s where some of the tension and challenge is,” Brown said Wednesday during remarks at the Hudson Institute.

“What we’re trying to do in some cases is kind of snap the line here and say … for these other weapon systems, you know, how do you modify them, adapt them” so they can get the information they need from ABMS, he said.

“In some cases, you just need a [data] translator to get the data to their weapon system without building a brand-new radio. And those are the things we’re working on,” he added.

But connectivity isn’t the only thing that’s required for ABMS — the Air Force’s contribution to the Pentagon’s concept for Joint All-Domain Command and Control (JADC2) — to be effective, he noted. Having sufficient processing power onboard deployed systems is also key.

Airmen shouldn’t have to send data that’s been collected to faraway headquarters to have it processed, Brown said.

“You don’t want to be all the way back at the headquarters, you know, directing traffic or having the puppet strings. You need to allow the airmen to go out and execute. That’s the key part,” he said.

The service will also need to consider how much bandwidth systems have available to download data. That will require distinguishing between important information that airmen need for warfighting versus something like “a big PowerPoint brief that’s X number of megabytes that’s going to clog the system,” Brown said. 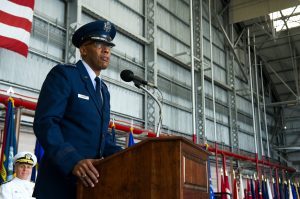