Later this year, the Air Force will hold experiments consolidating its enterprise service desk and end-user device programs at a small number of its installations around the globe, according to procurement documents.

The Air Force plans to “transition to an Enterprise Service Desk and End User Device as-a-Service delivery model,” according to a recent request for information. The plan is part of its larger Enterprise IT-as-a-service initiative, in which it hopes to outsource essentially all of its day-to-day IT operations and to more appropriately retool its workforce for mission-related cybersecurity.

“The strategic intent is to focus on our core competency,” Bill Marion, now acting Air Force CIO, said in April. “Our core competency is ‘fly, fight, win’ in air and space. It is not to run email servers or configure desktop devices.”

Beginning in October, the Air Force will launch the experiments at up to 20 of its 187 bases globally “to leverage commercially owned and operated IT services at those bases to learn and adjust before transitioning to the rest of the AF starting in 2020,” according to the RFI. That “representative sample” of about 20 bases are of “varying sizes and missions.”

The Air Force’s general hypothesis is that by consolidating these programs and outsourcing them to a commercial provider, it will improve user productivity and satisfaction at those bases.

“The AF wants to partner with industry to provide commercial IT services, improve performance of Air Force IT services, and allow re-missioning of military personnel to cyber warfighting missions,” the RFI explains.

As it stands now, the Air Force has “multiple service desks with multiple Information Technology Service Management (ITSM) solutions to include BMC Remedy and ServiceNow” and end-user devices “are centrally managed with a single standard image for all users.”

Based on the results of this RFI, the Air Force will likely issue a solicitation at a later time to contract for a provider to conduct the experiment. 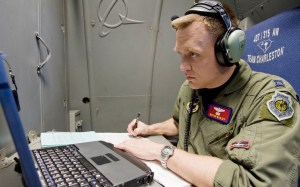