ADOC construction is being housed within the service’s Multi-Domain Task Forces — units stood up at specific bases to work on implementing modernized technologies and concepts of operations that use them. The overall goal of the task forces and new operations centers is to enhance data-sharing to link together new weapons to increase their range and precision and the speed at which commanders make decisions on what to deploy.

The All-Domain Operation Centers are part of the Army’s work in support of the Joint All Domain Command and Control concept of operations that will link all domains and all the services together through a military Internet of Things.

“The nascent ADOCs…will provide combatant commanders the ability to make decisions faster from the onset,” Col. Jason Charland, military deputy to the Department of the Army‘s Management Office-Strategy, Plans and Policy, said on a call with reporters Friday.

The ADOCs are important as they will create new central locations for commanders to see data from the field and provide faster analysis with the sensors linked together. The hope is to build them as “joint from inception,” to enable other services, not just Army commanders, to oversee operations, Charland added.

The operations centers would serve as endpoints overseeing a massive undertaking of data curation and synthesis. The backend part of the system is the focus of Lt. Gen. Denis Crall, CIO for the Joint Chiefs of Staff, and others in the DOD data community trying to link many types of data together.

“One of the biggest hurdles is really the common architecture and the data models,” Charland said. “To be able to communicate at speed and scale is a wicked problem.”

The Multi-Domain Task Forces the ADOCs will be housed under recently were stood up at Joint Base Lewis-McChord in Washington State. Two more are expected to be named in Europe and in the Pacific — two regions that are of high importance for the Army’s focus on great power competition. 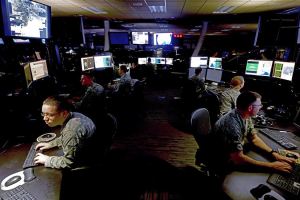