The U.S. Army is looking to build more relationships with tech startups and other “non-traditional defense partners.”

The Army Expeditionary Technology Search — or xTechSearch — is an initiative of the office of the Assistant Secretary of the Army for Acquisition, Logistics and Technology, also known as ASA(ALT).

The goal is to “enhance engagements” with the entrepreneurial community and improve the Army’s understanding of what’s potentially available, while integrating some of these innovators into the military’s tech ecosystem. And there’s a total of $1.95 million up for grabs.

“xTechSearch is a novel approach for linking innovators directly with the Army labs, with a focus on lowering the entrance barriers and spurring innovation,” the challenge page reads.

The prize competition will run in four stages between now and April 2019. The final winner will walk away with $200,000 in addition to intermediate prizes at each stage of the challenge.

The first stage of the challenge is open to all small businesses interested in pitching “novel technology solutions — a new application for an existing technology or a new technology concept entirely — to the Army.” This stage requires a tech proposal white paper, of under 1,000 words, due by July 11.

The submitted proposals will be judged by team experience, viability and, most importantly, “Potential for Impact/Revolutionizing the Army.”

Up to 125 winners at this stage will get $1,000 and an invitation to move forward with phase two. 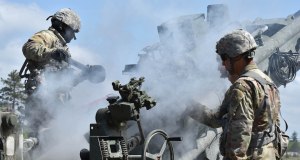