As the Army continues its efforts to use data as a “strategic asset,” it’s asking for industry help in finding emerging technology to assist day-to-day activities.

The service, in a recent sources sought document, expresses interest in fielding artificial intelligence and automation solutions for “practical business or operational problems.” The document outlines a quick turnaround for initial capabilities on automated information analysis, wanting new tech to be in use in a year’s time.

The document is light on the details of what use-cases the service is looking for, but it broadly calls for emerging technology to better analyze information and use the massive amount of data the Army generates, from business systems to combat operations.

“The U.S Army is interested in intelligent automation, augmentation, and analytics capabilities and solutions to harness the power of data, while improving operational efficiency and effectiveness,” the document states.

Other armed services have started down a similar path. The Air Force is training AI systems to enable faster analysis of data from its Distributed Common Ground System (DCGS), the network for military intelligence. The Army is still in the process of modernizing its DCGS, but the sources sought document shows that the military’s largest service wants to have automation and analytical tools at the forefront of the management of systems like the DCGS.

The document lists dozens of types of technology products and services the Army is interested in, ranging from robotic process automation (RPA) bots to AI.

The document makes reference to the Army’s overall goal to achieve multi-domain operations that can incorporate data from other military services. The multi-domain operations concept “is how the Army supports the Joint Force in the rapid and continuous integration of all domains of warfare – land, sea, air, space, and cyberspace,” the document says.

AI and automation in similar use cases has cut down on labor hours and tedious work once done by analysts, the Air Force said in a recent news release.

“Operational analysts have so much data to look at, and it’s coming at them fast and furious,” Chris “Jake” Jacobson, solutions architect and product owner from the Air Combat Command, which has piloted AI’s use cases in information analysis, said in the release. 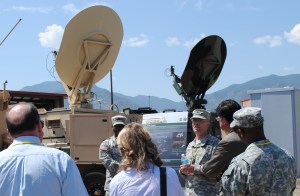 Army seeking technologies that will better ‘harness’ its data