The entire award is an $823 million firm-fixed-price contract. The companies will compete for orders to build out a strategic data platform for the system under the larger seven-year contract, according to an award notice from the Defense Department.

The DCGS system is a global network that the military uses to send information and intelligence to commands and outposts of all services around the world. Each of the military services operates their own interoperable portions of the larger system-of-systems that interconnect with one another. This contract is specific to the Army’s use of the system. Government Accountability Office reports have cited outdated technology and interoperability issues with the larger system in the past.

The contract is the second big win for Palantir under the modernization of the Army’s Distributed Common Ground System, which is broken into two “capability drops.” In 2018, the Army awarded Palantir and incumbent Raytheon a 10-year, $876 million contract for Distributed Common Ground System-Army Capability Drop 1. This week’s award is for Capability Drop 2.

After struggling initially to find its place competing with larger, traditional defense contractors and protesting an earlier solicitation for work on the Army’s DCGS without success, Palantir appears to have landed itself as a serious partner for the military’s data modernization and intelligence needs.

Palantir recently won another prototype contract for $110 million to do similar work on the Army’s Vantage Program, formerly known as the Army Leader Dashboard. The company will be working to integrate data on the Army’s disparate networks that pull data from thousands of sensors around the world.

“The problem for Army’s leaders and commanders at every level is you’re trying to make decisions off of accurate data but the data is stored in so many places, it’s often very hard to figure out what’s going on,” Doug Philippone, Palantir’s lead for global defense, told FedScoop in December.

Palantir also made news recently by securing a Federal Risk and Authorization Management Program (FedRAMP) Moderate authorization. The new certification is “critical” to the company’s “fast-growing” work at civilian agencies. It also is said to have taken over part of the contract that Google stepped away from under DOD’s Project Maven.

The U.K.-based BAE Systems, on the other hand, is a seasoned defense contractor with decades of experience providing national security and aerospace services to the military. In 2010, the Navy awarded BAE a contract to enhances its version of DCGS. 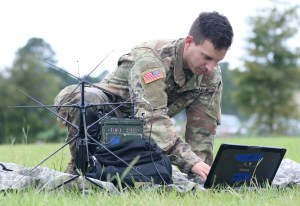