For many gamers, the closest they’ll get to military service is pulling the trigger on a controller while playing the latest “Call of Duty” game. But the Army wants to change that.

The military branch is fielding an esports team that will begin competing in a variety of video game tournaments this summer. Already, more than 6,500 soldiers have applied to join the team, which will max out at 30 active duty and reserve members.

The initiative reflects how the phenomenon of esports — short for electronic sports, essentially competitive video gaming with spectators — has in recent years captured the attention of Americans, particularly young men. In 2018, it was projected that esports commanded a market of 380 million players and viewers worldwide, and generated more than $905 million. Even ESPN, known for covering traditional sports, now devotes part of its coverage to esports. Several dozen colleges and universities have turned to esports as a recruitment tool, even offering scholarships to talented gamers.

The Army wants to tap into this new opportunity as a tool to reach and recruit a new audience. These esports soldier-gamers will spend three years with the Marketing and Engagement Brigade as part of the Army Recruiting Command at Fort Knox, Kentucky, like the Golden Knights parachute team and the Army Marksmanship Unit, which “create awareness about the Army and the opportunities it provides.”

“If we are going to be successful in recruiting, then we need to be where young people are — and they are operating in the digital world,” Maj. Gen. Frank Muth, commanding general for U.S. Army Recruiting Command, said in a statement.

“There are already thousands of current Soldiers who are competitive online gamers. Now we are giving them a chance to use their talents to help us relate to and connect with other young gamers,” Muth. “They will have the ability to start a dialogue about what it is like to serve in our Army and see if they are interested in joining.”

Technically, though, they aren’t recruiters, according to the team’s official site, but instead “liaisons between the American public and recruiters throughout the nation.

“They will be in a support role to help young people see Soldiers in a different light and understand the many different roles people can have in the Army,” it says. “They will help the Army address the growing disconnect with society. Members of the team will be paid the same as other soldiers of their equivalent rank.”

In a sense, members of the Army will be a hybrid of a professional gamer and a solider. They’ll still be required to conduct physical training and maintain weapons qualifications and other certifications. On the other hand, they’ll also continually train in their specialty: video games.

“There will be esports training,” Sgt. 1st Class Christopher Jones, NCO-in-charge of the team, told the Army News Service. “So whatever game they’re playing in, they’ll not only be playing it, but be coached in it to get better.”

“Esports is like traditional sports,” Jones said. “Nobody can just walk in and expect to play at a competitive level.” 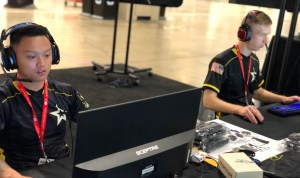