The Army will stand up its second multi-domain task force, this time in Germany as the first unit focused on modernizing all-domain operations within Europe.

The Multi-Domain Task Force-Europe will lead the charge in implementing new combat operational constructs in Europe along with a Theater Fires Command, which will focus on increasing the range and precision of artillery through faster networks and data usage. More than 500 soldiers will be sent to Army Garrison Wiesbaden in Germany across both units, the Army says.

The task force will be comprised of artillery, missile defense, intelligence, cyberspace, electronic warfare and other elements and serve to combine their efforts through new networking technology. The task force will activate Sept. 16.

The task forces are unique units of soldiers that are designed to implement the Army’s future concept of operations that will rely heavily on networking data across different domains, like air and land operations. The first task force was set up in the Joint Base Lewis-McChord in Washington to focus on multi-domain operations in the Pacific. The task forces also are building new all-domain operations centers that allow commanders to see more data and use technology to extract meaning from multiple operations at once.

One of the Army’s multi-domain priorities is extending the range and precision of long-range artillery, or “fires.” To achieve these goals, the Army wants to link data from all domains and create new software to fuse information into stronger targeting methods, leaders have said. The task force will take many of the lessons learned in previous Army test events and put them into practice.

“The future is all about range and speed,” Army Chief of Staff Gen. James McConville previously said about the work the multi-domain task forces are doing.

In Europe, where Russia remains the No. 1 security threat, focusing on long-range precision fires suits a land-based conflict.

The Pacific task force unit is focusing on area-denied communication resiliency, something that the Army anticipates will be a threat in the Pacific. Leaders have voiced concern about China’s technical abilities to create cyber-defenses and offensive weapons that could disable the U.S. military’s ability to communicate and use command and control systems.

“We face increased physical and virtual standoff through layered and integrated networks, where adversaries leverage all instruments of national power to blur the lines between competition and conflict, altering international norms to the detriment of the international community,” Brig. Gen. Jim Isenhower, commander of the task force in Washington, previously said. 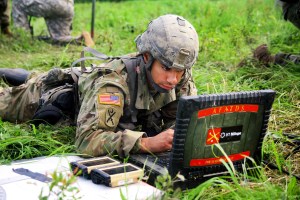 Army to stand up multi-domain task force in Germany