The bipartisan fiscal 2023 omnibus spending agreement includes $2.9 billion for the Cybersecurity and Infrastructure Security Agency (CISA), a $313 million increase over its current budget as well as $1.6 billion for the National Institute of Standards and Technology (NIST), an increase of $397 million for the agency.

The spending package includes $1.3 billion for CISA’s cybersecurity programs, which represents a year-on-year increase of $230 million, although the bill also includes unusual language that would fine the agency $50,000 for every day it is delayed on quarterly congressional briefings.

CISA is a year late submitting its organizational planning, staffing and budgeting document to Congress, known as a “force structure assessment.”

If Congress doesn’t have the document to evaluate budgeting for CISA soon, Rep. Jim Langevin, D-R.I. told CyberScoop earlier this month that it could impact the agency’s funding.

The omnibus also includes $200 million for the Department of Energy’s Cybersecurity, Energy Security, and Emergency Response (CESER) office and will allocate $100 million in funding for the Treasury Department’s Cybersecurity Enhancement Account, $20 million more than last year.

The spending package also targets cybercrime from foreign adversaries in particular by allocating $50 million to tackle cybersecurity threats emanating from Russia and other adversaries as well as $422 million for the Office of Personnel Management (OPM) to address cybersecurity and hiring initiatives. The bill includes a provision requiring the Federal Trade Commission (FTC) to collect and report on international cyberattacks committed by foreign actors, with a specific focus on those from China, Iran, North Korea and Russia, according to a Senate Republican summary of the bill.

The omnibus also provides $22 million for the White House Office of the National Cyber Director, the first time the new office will receive resources through an appropriations bill. The office is expected to issue a new national cyber strategy in 2023, as well as a cybersecurity workforce, training and education plan.

Congress passed the Creating Helpful Incentives to Produce Semiconductors (CHIPS) and Science Act in August to boost domestic semiconductor manufacturing and help the U.S. compete with China in the development of cutting edge technologies.

The omnibus spending package ​​fell short of providing the maximum funding authorized under the CHIPS Act but nevertheless authorized large funding increases for NIST, the National Science Foundation (NSF), and the Department of Energy’s (DOE) Office of Science.

NIST’s $1.6 billion allocated includes $953 million for scientific and technical research and up to $462 million for the construction of new research facilities.

NIST’s Manufacturing Extension Partnership Program was also allocated $175 million, an increase of $17 million, while an additional $4 million has been set aside to establish a NIST center of excellence to develop standards for measuring climate change and its effects on the country. 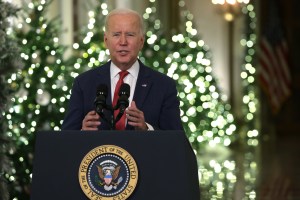