How the federal government will shape its cyberdefenses has been one of the central questions of the decade. But it’s a two-headed problem of not only finding the tools, but also the workforce, a senior White House official said Thursday.

“It’s not just the guys and the women in the basement that are operating our technology, it’s at every level throughout the organization,” Grant Schneider, acting U.S. chief information security officer and senior director for cybersecurity at the National Security Council, said at the Digital Transformation Summit presented by Dell Technologies and produced by FedScoop.

“Acquisition officers that are acquiring information, all of the way up to directors and deputy directors in the C-suite, if you will, in a company or inside the federal government—we need people that have an awareness [of cybersecurity skills],” he said.

As the government works on its culture, industry is able to make strides in its offerings, said Randy Kendzior, Dell client brand senior consultant.

“The good thing is that the client has evolved over the years, and it gives us a lot of benefits that we can now take advantage of,” Kendzior said. “In days in the past, we used to take a client device, typically a notebook or a desktop, and peanut butter-spread it across the entire organization. Now with the technology, we have the ability to focus in on user profiles to put the right technology in the right hands of the people.”

The challenges of the time have drawn the private and public sectors into a deeper partnership. From the White House’s perspective, that includes expanding both recruiting and expanding beneficial talent swaps with the private sector to inject federal agencies with outside talent.

“In addition to how do we turn the ship of how we do recruiting, we are also looking at more innovative ways that we can do exchanges between industry and the government. We have to find ways to where my government workforce can easily transition out to industry and then plan to come back a few years later at some point.”

So while the government strives to strengthen its cyber posture, the old relationship of consumer-provider is continuing to shift to working partnerships.

“Our careers aren’t linear anymore,” Schneider said. “In the government, I think we few them as a very linear, stay-in-the-government-for-20-or-30-years. We’ve got to have an ability for people to come in and out, and that still very hard today because of ethics laws and other things.” 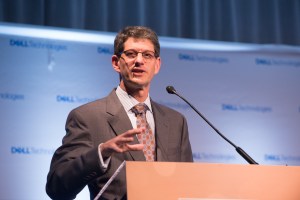