CIA IT chief John Edwards has been appointed deputy chief operating officer, the agency’s No. 4 in charge.

Edwards has served as CIO and director of the CIA’s IT enterprise since March 2016.

Juliane Gallina, vice president of U.S. federal key accounts at IBM, will take over as CIO next month with Edwards’ move up.

Prior to a stint in the private sector, Edwards also served in a number of positions at the agency, including “14 years as a Communications and Technical Operations Officer within the Directorate of Science and Technology (DS&T) and five years serving as the Chief of Staff to the CIA’s Executive Director,” according to a release.

Gallina, who has spent nearly 10 years with IBM, is a retired naval reserve officer and served as an engineer with the National Reconnaissance Office prior to her public sector work. See her TED Talk below in which she talks about her background as a naval officer.

Edwards is set to make his first remarks in the new capacity March 24 at the Cipher Brief Threat Conference in Sea Island, Georgia, the release says. He recently discussed the agency’s data-driven mission and need for more data-savvy agents. 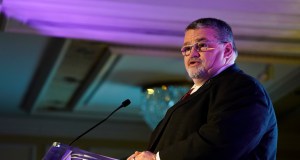