The system that the U.S. Coast Guard uses to track more than 700,000 sea vessels continues to have duplicate entries, missing data and other management missteps, a Government Accountability Office report found.

The issues with the Marine Information for Stagey and Law Enforcement (MISLE) data system are not new, according to the report. Many of the problems stem from a lack of fixing earlier flaws laid out in other GAO reports and a lack of proper investment, the report says.

GAO recommends training for system users, filling “mission needs” for the system and reviewing past recommendations from the GAO. The report also found that users were unable to enter data while at sea, a process that doesn’t meet “user needs” and can result in miss-entered information.

The Coast Guard has struggled with its data management and IT systems, with the its commandant, Adm. Karl Schultz, saying the service is at the “brink of catastrophic failure” if it doesn’t modernize it’s IT systems.

The MISLE system is used to “support agency operations by tracking and aggregating mission activity data” and store commercial vessel inspection results. The duplicate records found in the system pose a risk to the Coast Guards ability to inspect vessels.

“Users told GAO that duplicate or incomplete records can create a risk that Coast Guard personnel may not have full vessel histories when inspecting vessels to resolve prior safety deficiencies,” the report states.

“The Coast Guard has taken steps to update MISLE since its 2001 release; however, it has not followed its own processes to manage subsequent investments,” the report stated. “In its most recent upgrade to MISLE, which began in 2008, the Coast Guard did not follow key systems development processes nor deliver some planned functionalities, such as the ability to remediate duplicate vessel records and input data in mobile capacities.”

The Coast Guard could see a major budget increase to fix its data and broader technology failings. The House Appropriations Committee advanced a funding bill to give the service $12.8 billion for fiscal 2021, $711 million more than the service requested. Much of that plus-up will go to help fix the failing technology at sea and on land, including $78 million for cybersecurity, satellite technology and other communications upgrades; $26.9 million for command, control, communications, computers, cyber, and intelligence systems; and $25 million for critical shore infrastructure and fleet maintenance, which could include IT needs.

The Coast Guard has also been looking for larger data storage capabilities for the whole service. For the past few years, it has been searching for its own version of the Department of Defense’s Joint Enterprise Defense Infrastructure (JEDI). While considered a branch of the military, the Coast Guard falls under the Department of Homeland Security and not the DOD. 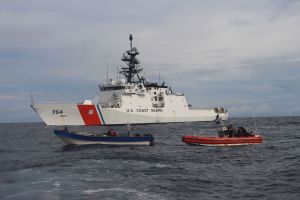