The U.S. Coast Guard is taking advantage of phone-tracking services to locate distressed mariners up to 20 nautical miles offshore through a mobile app that acts like 911 emergency service.

The “i911” app is currently being used in the Pacific Northwest and has the clearance to be implemented at Coast Guard districts across the country. While the guard describes the software as “groundbreaking” in a news release, it behaves like similar technology already used by law enforcement and consumers. Its adoption by the Coast Guard, however, represents a step in a more modern direction for an agency whose legacy IT systems are on the “brink of catastrophic failure,” according to its top officer, Adm. Karl Schultz.

The i911 application allows Coast Guard fleets to access phone location data through a web-based interface for mariners in need of a rescue, according to the release. Boaters don’t need to download anything as long as they can click a link texted to them from rescuers and enable the sharing of their location data.

“While VHF radio remains the most reliable form of distress communication, this tool gives the Coast Guard another avenue to rapidly locate mariners in distress utilizing smart phone technology,” said Lt. Cmdr. Colin Boyle, the command center chief of the 13th district in Washington that is the first to adopt the technology.

In February, Schultz called for a “tech revolution” to increase off-shore connectivity and modernize legacy systems across the service. Much of the guard’s plan revolves around cloud migration and upgrading hardware on cutters, mid-sized ships that make up the bulk of the service’s fleet. These initiatives are designed to improve services and better take advantage of applications like i911.

The tech is a free service developed by Callyo Incorporated, a mobile technology company that caters to the law enforcement market. The application is also used by other law enforcement agencies across the country, according to the company’s website. The application can only access location data during rescue operations with the permission of the distressed mariner.

“In addition, the location sharing feature is only utilized during an active search and rescue case and can be turned off by the mariner at any time,” Boyle said in a news release.

Procurement documents show the Coast Guard had a “Cooperative Research and Development Agreement” with Callyo in 2019. That year, the Guard ran pilot programs for the app’s use, which lead to several successful rescues, the guard said. While the 13th district in the Pacific North West is the first part of the guard to fully implement the technology, the rest of the service has the authority to adopt it.

This type of technology has been prevalent for years and widely used in many other industries. Phones-based location data is used in services like Apple’s “Find My” app, which allows authorized location data viewing for devices and many companies use large-scale data aggregation of smart phone location data. 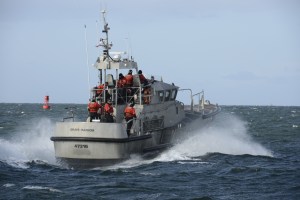 Coast Guard extends mobile connectivity to distressed mariners with ‘i911’