The Department of Health and Human Services’ opioid crisis code-a-thon was a big deal. The first-of-its-kind event brought more than 300 citizen coders from around the country physically into the agency. It led to the opening of nearly 70 datasets from HHS, other federal agencies, state and local partners and the private sector. It transformed the main hall of the Hubert Humphrey building with drapery, a stage and so many tables.

But for agency CTO Bruce Greenstein and chief data officer Mona Siddiqui, the event was a big deal for a more intangible reason.

“Initially when we started we started there were funny looks about what exactly are you guys trying to do,” Siddiqui told FedScoop. “I think the culture change and the spirit that’s been infused by the mix of folks coming from outside government and really problem solving on issues that have been identified by us on the federal government side — I think that’s really the story.”

The event was clearly meaningful to HHS employees who participated. But even for those who just walked by and noticed that something was different, Greenstein and Siddiqui suggested, it planted a seed of change.

“To be able to change the way people think — I think that’s really powerful,” Siddiqui added.

Of course, culture isn’t the only story here. Three of the competing teams won $10,000 each for their contributions. The winners:

“It was hard to pick just one of the three,” Greenstein said of the judging process — so many ideas had valuable components.

It all started on Wednesday afternoon HHS welcomed 50 teams, each made up of three to five computer programmers, health experts and innovators, into the Humphrey building for 24 hours of intensive coding. Teams came from academia, private industry and more — representatives of Google, IBM, Duke, Stanford and the National Institute of Health, to name a few, were all present.

The task? Use any of the nearly 70 public data sets available to create solutions that can combat the ongoing opioid epidemic.

Claire Walsh, one participant leading a team from Excella Consulting, told FedScoop it was the mission of the code-a-thon that drew her in. Excella likes to create impact, she said, and “this is a very impactful project.”

That said, Walsh has been to enough of these kinds of events to know that the coming 24 hours wouldn’t prove easy. “The data,” she laughed, when asked what she expected to be the most challenging part of the experience. Federal data can be unreliable and inconsistent in quality, she said. Plus many of the available data sets were ones her team had never seen before.

Participating teams self-selected into one of the three challenge categories presented — opioid treatment, opioid usage or opioid misuse prevention — and soon it was time to get to work.

The judging process had two parts. In the first round the 50 teams were narrowed down to just nine — three in each category. Those nine then had the chance to demo again in front of expert judges, and a gathered crowed, in the main hall.

Outside of the winners, the presented tools included visualizations showing the flow of illicit drugs; patient-facing apps to give people more information about their individual risk of addiction; and a text messaging service offering education and support to the friends and families of addicts who so often find themselves on the front lines of care. Projects were all still in the early stages and often limited in usability, but each pulled on a diverse set of data and tackled an interesting piece of the challenge.

So what comes next?

For teams, there is always the possibility of moving forward with their work. A representative from the National Institute on Drug Abuse spoke to participants about the funding that could be available to them — both through a startup competition the institute is currently hosting, and through Small Business Innovation Research grants.

As for the code-a-thon process itself, Greenstein said future editions will depend on the feedback that this one gets. He did, however, express the agency’s intention to “franchise” the concept and bring it to new communities around the country. The first such event is currently scheduled for April in Louisiana.

“I expect that you’ll see us do more of this in the future,” Greenstein said. “It went beautifully.” 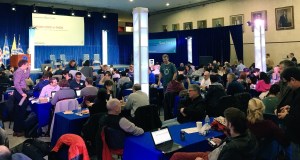