A senior lawmaker with significant federal IT expertise on Wednesday announced his candidacy for the role of ranking Democrat on the House Committee on Oversight and Reform.

In a statement Wednesday announcing his bid, Connolly, who already chairs the Subcommittee on Government Operations, highlighted his 14-year commitment to modernizing government, the federal workforce and U.S. Postal Service reform.

“We need a tested leader, who will not be timid in the face of Republican insurrectionists,” Connolly said in his announcement. “One who has a deep understanding of the issues facing our committee and our country.”

If Connolly is selected for the post, it could augur a more detailed approach to IT modernization issues from the House Oversight Committee during the 118th Congress.

Technology issues Connolly has championed include regular updating of the Federal IT Acquisition Reform Act scorecard, increased investment in the Technology Modernization Fund, and codification of the Federal Risk and Authorization Management Program. Connolly also helped establish the bipartisan House IT modernization caucus.

Even if Connolly wins, there’s no guarantee he’ll become committee chair with Republicans expected to take back the House in the November midterm elections.

Republican victory could scuttle hopes of increased attention being paid to agencies’ IT and cybersecurity needs, with party members already promising to investigate President Biden via the committee like Democrats have former President Trump.

“Our caucus must continue to repair the damage left by the Trump administration, while also protecting the progress made by President Biden and our Democratic majorities,” Connolly said in his statement. 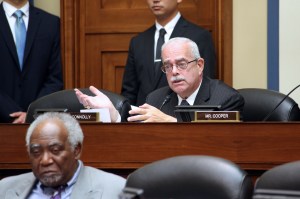