The General Services Administration doesn’t anticipate delaying deadlines for agencies to modernize their telecommunications under the Enterprise Infrastructure Solutions (EIS) contract. But some vendors on the contract believe that the ongoing coronavirus response might further delay new awards.

Agencies had until Sept. 30, 2019, to issue task orders under the $50 billion EIS, the government’s flagship telecom and network modernization vehicle. But that deadline came and went with some larger agencies like the departments of Homeland Security and Agriculture having yet to put task orders out for bid.

“My kid’s school just got extended another month to April 24,” Mike Maiorana, senior vice president of public sector at Verizon, told FedScoop. “I think we’ve got to — the longer we go here and the more information we get — be open to adjusting our plans to ensure that the federal agencies and the vendor community are best positioned to deliver on what’s most important.”

All of those services can still be procured using EIS’s predecessor, Networx, as well as WITS3 and local service area contracts through March 31. That’s when GSA intends to begin limiting the use of such contracts — extended until March 31, 2023, when they’ll expire.

“The agencies that have open procurements have taken actions to modify due dates past March 31,” said Dave Young, senior vice president of public sector at CenturyLink. “I think probably the next step I would expect is that GSA — as they better understand the timetable of this impact — will modify their schedule.”

Depending on how long the coronavirus continues to spread and impact federal operations, GSA may need to extend existing contract expiration dates even further, Young said.

GSA has asked agencies’ transition teams for information on how COVID-19 is impacting their move from Networx to EIS and agreed to work with those that have already awarded task orders on a “case-by-case basis” to mitigate delays, said an agency spokesperson.

“Recent events have demonstrated the critical role that modern, flexible telecommunications and network services play in enabling a governmentwide response to a national emergency. The transition to EIS will lay the groundwork for accelerated IT modernization and improved [Continuity of Operations Program] implementation,” the spokesperson said. “A timely transition now is crucial to helping agencies acquire emerging communications technologies so they can plan for future challenges.”

Based on agency feedback, GSA may issue additional broad guidance or assistance, the spokesperson added.

EIS work continues for some

In the meantime, EIS contract primes like Verizon, CenturyLink and MetTel noted a small wave of pre- and existing-bid activity in spite of the coronavirus.

Agencies should take a “balanced approach” when it comes to augmenting their networks to handle COVID-19 and transitioning to EIS, he said.

The Department of Labor became the latest agency to come out with its EIS request for proposals (RFP) over the weekend.

Labor actually released a winner-take-all task order early on but reworked it after a pre-award protest from Granite Telecommunications. Now the task order will consist of two to five awards.

The Social Security Administration is still moving quickly on its EIS transition, having awarded a $253.5 million task order for local, long-distance and access management to MetTel on Feb. 4, said Diana Gowen, senior vice president of the small business’ federal program.

Work has been stopped on MetTel’s other task order award, a $127.3 million contract for voice services from the Department of Veterans Affairs, due to a protest from CenturyLink.

CenturyLink’s technical evaluation was priced higher than MetTel’s. But the award was best value, and MetTel came in lower on price with everything else being equal, said an industry source.

The delays at DHS and USDA in issuing RFPs might be chalked up to turnover in their chief information officer shops, Gowen said.

Regardless, it appears two large agencies won’t have awarded task orders by the next March 31 deadline along with a host of smaller ones.

When the Networx contract saw delays, it took a series of congressional hearings and the Transportation Security Administration being hauled in front of the House Oversight Committee for lawmakers to realize GSA didn’t have the authority to make agencies do anything, Gowen said.

Members of the House government operations subcommittee expressed frustration earlier this month that GSA couldn’t punish agencies for missing EIS deadlines. But that was before Congress became consumed with emergency coronavirus legislation and the most vocal EIS critic, Rep. Mark Meadows, R-N.C., accepted the job as President Trump’s new chief of staff.

“I don’t believe, given the current world situation, that this is going to get the kind of attention from the Hill and [the Office of Management and Budget] that it would take to really bring it over the finish line,” Gowen said. “So I think things will eke out like they have been, and we’ll just all deal with it.”

Gowen thinks GSA will likely move its deadlines “ever so slightly,” citing COVID-19. But officials working on EIS like Fred Haines, Bill Zielinski and Allen Hill “would all like these agencies to just get on with it,” she said.

A silver lining: The slow release of task orders is preferable to a tsunami because it allows for more competition, rather than primes picking and choosing their battles, Gowen added.

Fair opportunities due dates being pushed back to April or May has given CenturyLink a chance to develop a new operational rhythm in response to the coronavirus, Young said.

“I do think that agencies and GSA have all focused on the right things,” he said. “And that’s: How do we keep government operational for the citizens of the country and take the right steps to augment networks that need to be augmented to handle a changed work environment?” 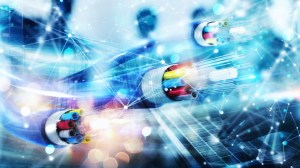