The initial order was made with Reston, Virginia-based tech company Leidos, one of the winners of a $390 million multiple-award, indefinite delivery/indefinite quantity LEP contract.

“We are excited to provide the latest, non-intrusive scanning technology to support CBP’s essential mission,” said Jim Moos, president of Leidos Civil Group, in the company’s Thursday announcement. “Safeguarding our nations’ ports and borders is a critical priority, and we’re proud to support CBP Field Operations as they expand their capabilities and secure the Southwest border.”

CBP’s LEP contract is a companion to its multi-energy portal (MEP) contract, which Leidos was awarded in April. A second, $95 million order was recently placed under that contract, which has a ceiling of $480 million.

The Department of Homeland Security Science and Technology Directorate is meanwhile working with CBP and several other agencies to develop requirements and testing criteria for tracking systems on drones along the U.S.-Canada border.

The air domain awareness systems were evaluated on how quickly and accurately they could detect, track and identify targets in mountainous terrain, as a follow-up to similar tests on the plains of Camp Grafton, North Dakota in April.

“Safeguarding the vast geographical landscape and skies surrounding the northern border is no small feat,” said Shawn McDonald, program manager for DHS S&T, in a Thursday announcement. “So these ongoing efforts to increase our security and ensure our safety, both there and throughout the rest of the country, is a whole-of-government effort that we’re proud to be a part of.”

Also involved were the U.S. Coast Guard, Department of Defense and Federal Aviation Administration. DHS S&T plans to issue a comprehensive report on each technologies’ performance for other agencies interested in buying them to review. 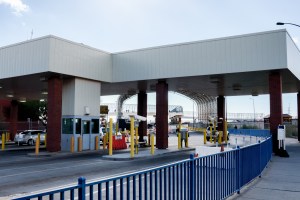