A current competition posted to Challenge.gov asks participants to use readily available data to tell where illegal fishing may be happening — all without sending anyone out to sea.

The contest, submitted to the federal coding-contest site by the Office of Director of National Intelligence, asks participants to develop an algorithm that can use observable automatic identification system (AIS) data and other oceanographic information like salinity, ocean depth, sea temperature and more to determine whether a given boat is engaging in illegal fishing.

The challenge builds on one from 2016 to ask that, additionally, participants use the data to find out what kind of fishing is taking place, regardless of what the crew says it is doing.

“In this second round of the challenge, we will be building upon the first round a bit, by now attempting to further classify based upon the type of fishing taking place,” the challenge page states.

Illegal, underreported and unregulated (often shortened to IUU) fishing is damaging from both an environmental and economic perspective. The World Wildlife Fund calls illegal fishing “a key driver of global overfishing,” and an economic study from 2009 estimated the global losses associated with IUU at somewhere between $10 billion and $23.5 billion per year.

Laws like the Illegal, Unreported, and Unregulated Fishing Enforcement Act, signed by President Barack Obama in 2015, have been enacted to crack down on the practice. But laws like this are tough — and expensive — to enforce, a realization that has prompted increasing interest in how technology might be able to help.

The ODNI isn’t the government’s only attempt. For example, the yearly “fishackathon” first organized by the State Department in 2014 has provided a space for teams to tackle the issue in the past. In 2014 one team did it by developing a kind of whistleblower mobile app allowing fishermen can report any questionable activity they may see.

In the case of the Challenge.gov callout, the participant with the best illegal fishing prediction algorithm stands to win $10,000. 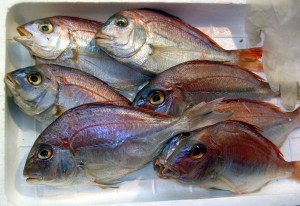 Is that boat’s catch illegal? Challenge.gov asks competitors to figure it out using data