The Department of Homeland Security’s Office of the CIO is looking for “highly specialized technical support services” to better serve the department’s headquarters business units.

This solicitation will likely result in the creation of multiple new BPAs worth up to $250 million, the department said.

DHS officials added that the new solicitation resulted from a need to re-compete multiple existing contracts under its Enterprise System Development Office BPA, set to expire next year.

The solicitation seeks cloud service providers and other vendors that can offer DHS a number of services, including:

The agency has been actively pursuing a shift to cloud computing since 2011, releasing its most recent data center optimization strategy in October 2016 in an effort to shrink its digital footprint and capitalize on cloud technologies.

New DHS CIO Richard Starapoli detailed his plans to modernize his office at FedTalks at Night earlier this summer, particularly in moving his department’s business units to the cloud at a hedge-fund pace.

“Why do we want to continue with months and years of debate about whether something is cloud-ready?” Staropoli questioned at the event in June. “I am not going to let that percentage of things that aren’t cloud-ready hold up DHS moving along and transitioning the things to the cloud that we use every day, which will result in greater productivity, more stability, greater security, and a tremendous financial savings in the long-run.”

Stakeholders will have until noon on Aug. 25 to respond to the solicitation. 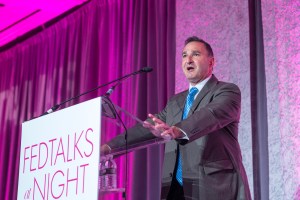