The Department of Justice is now permitting the use of body-worn cameras by federally deputized officers from state, local, territorial, and tribal law enforcement.

As of Thursday, task force members can activate the cameras while serving warrants, making arrests and conducting searches in specific circumstances — contingent upon their respective agency’s policies.

The policy comes after officers in Detroit, Houston, Park City and Salt Lake City, Utah, and Wichita, Kansas, successfully piloted the technology during task force operations from January to September.

“After spending a substantial amount of time examining this issue, assessing the results of the pilot program, and taking into account the interests and priorities of all the law enforcement agencies involved, I am pleased to announce that the department will permit the use of body-worn cameras on our federal task forces in specific circumstances,” said Attorney General Bill Barr.

Officers who activate their cameras are responsible for downloading, or having their agency download, the resulting recording onto external media like a hard drive for submission to the task force.  The recording is considered a federal record and will be maintained “as appropriate,” according to the policy. Public access is not a given, and the federal agency sponsoring the task force will handle the recording’s potential release.

DOJ began its body-worn camera pilot after Atlanta Police Chief Erika Shields withdrew from federal task forces in May 2019, citing the government’s ban on the devices, which applied to local police in joint operations. Atlanta requires its police wear body-worn cameras and was among the cities that expressed concerns with the government’s conflicting policy for years.

The department’s pilot was announced a success shortly after the fatal shooting of Michael Forest Reinoehl, 48, by four members of a U.S. Marshals Service-led fugitive task force on Sept. 3 in Portland, Oregon. None of the officers who shot Reinoehl had body-worn cameras on at the time. Reinoehl was an antifa supporter suspected of shooting and killing right-wing activist Aaron J. Danielson, 39, who had just participated in the Trump 2020 Cruise Rally caravan.

State and local agencies interested in participating in DOJ‘s program must contact the special-agent-in-charge of the agency sponsoring their task force or their district’s U.S. Marshal, if the task force is led by the U.S. Marshals Service.

“The Department of Justice has no higher priority than ensuring the safety and security of the American people, and this policy will continue to help us fulfill that mission,” Barr said.

Body-worn camera training and distribution might be gradual, depending upon demand, the DOJ said. 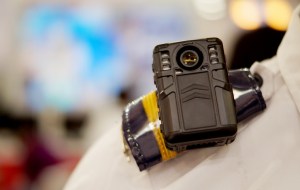