The nation’s top uniformed officer fears that Google and other companies that work with China put the U.S.’s competitive advantage at risk.

Gen. Joseph Dunford, chairman of the Joint Chiefs of Staff, said Thursday during an interview hosted by the Atlantic Council that he has a meeting scheduled with Google to discuss the company’s involvement with China and how it “indirectly benefits the Chinese military and creates a challenge for us in maintaining a competitive advantage.”

“We ought not to think that it’s just about business when we do business in China,” Dunford said, expressing that such work “is going to lead to the intellectual property of that company finding its way to the Chinese military.”

Dunford said he’s “happy to have that debate,” and reasoned that he has nothing personal against Google and that it’s not the only company with such a venture in China. “This is not about me and Google. This about looking at the second- and third-order effects of our business ventures in China.”

The general, however, didn’t mention Google’s recent decision to step away from work supporting the American military, particularly providing artificial intelligence for image or video detection as part of Project Maven. The company also recused itself from bidding for the Department of Defense’s $10 billion Joint Enterprise Defense Infrastructure (JEDI) commercial cloud procurement. 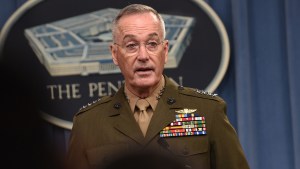 Gen. Dunford to meet with Google on its AI work that ‘indirectly benefits’ China