About 2 million civilian personnel use technology to do their jobs and training needs to be considered along with funding as agencies look to close gaps highlighted by the FITARA scorecard, Maria Roat, deputy federal CIO, said Monday in testimony.

The data science program will be similar to the Federal Cyber Reskilling Academy, which led to the creation of new government cyber jobs at the departments of Homeland Security and Veterans Affairs and the Environment Protection Agency after graduates initially struggled to find roles.

“Just as important as we consider any technology investment, we should also remember that the people charged with using those solutions must also be skilled in the use of technology,” Roat said during the FITARA 10.0 hearing, held by the House Oversight Subcommittee on Government Operations. “As the pace of capability and threat continues to accelerate, we must invest in our workforce to keep their skills relevant.”

Workforce transformation continues to lag in spite of the FITARA scorecard, which saw all agencies receive a passing grade of C or higher for the first time. That’s because agencies’ first priority is using IT for their mission and training second, Cameron Chehreh, vice president of presales engineering at Dell Technologies Federal, told FedScoop.

“You might see some gaps in the workforce’s ability to keep up,” Chehreh said.

The tenth FITARA scorecard for the first time revealed 16 of the 24 Chief Financial Officers Act agencies had CIOs that reported directly to their agency’s head or deputy. But none of the 24 agencies have fully established policies addressing the CIO role in accordance with federal guidance, said Rep. Gerry Connolly, D-Va., the House Oversight Subcommittee on Government Operations chair. 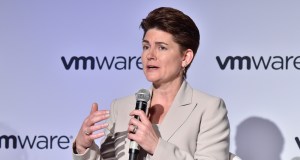