As the Army moves toward finalizing its new information advantage doctrine, its next major focus is better fusing open-source intelligence with the exquisite military sources it has traditionally relied upon, according to the service’s retiring top cyber commander.

Defense of the network, which officials have called one of the Army’s foundational weapon systems, must be underpinned by good information, which must come from integrating traditional military intelligence and commercial intelligence, Lt. Gen. Stephen Fogarty told FedScoop.

“What we’re seeing is the integration of traditional military intel, these exquisite capabilities, integrated with all this other information that is available,” Fogarty, the outgoing commander of Army Cyber Command, said in an interview.

Fogarty is retiring and handing the reigns over to Maj. Gen. (P) Maria Barrett in a change of command ceremony May 3.

Fogarty said the Army added “inform” as a fifth mission thread alongside operate, defend, attack, influence, which is critically important in defending the network and denying the network to the enemy.

While there are some things only the U.S. military can do with its unique intelligence collection capabilities, Fogarty said it has gained an appreciation for the non-traditional sources of information and that power comes by fusing the two, not an either-or.

Commercial threat intelligence can be very helpful in tipping analysts to potential threats on the network, Fogarty said.

Commercial vendors have a global presence on millions of machines — places the military might not have collection on — and have the ability to report how a threat is presenting itself in an unclassified manner.

What this provides the military, Fogarty said, is immediately actionable information that can be used to block a threat while the traditional military intelligence can provide a deeper dive into the threat itself.

The key, however, is not for traditional military intelligence professionals to validate or duplicate what commercial sources are providing.

“What my traditional military intelligence can do is they can help refine who’s behind it. Why is this happening now? What’s the long-term objective for this?” Fogarty said.

To help fuse these intelligence disciplines, the Army created the Cyber Military Intelligence Group, which will blend military intelligence activities with commercial data and public information to support cyber operations.

“Over the last four years, we’ve worked that very, very hard” on that fusion, Fogarty said.

Additionally, the new Information Warfare Operations Center, which will provide an unprecedented real-time ability to sense and understand the global information environment, is helping to integrate capabilities and mission threads as well, he said.

Other changes Army Cyber Command is looking to make as it transitions to information advantage include a raft of proposals it has submitted for approval to the Army regarding new constructs for 1st Information Operations Command and information warfare task forces.

Specifically, Fogarty said the command deployed an expeditionary cyber team — one of an eventual 12 such teams as part of the 915th Cyber Warfare Battalion that will help plan tactical cyber operations for commanders and conduct missions in coordination with deployed forces — to the Pacific with liaisons to help augment the Multi-Domain Task Force. 1st Information Operations Command became the framework to operate across the Pacific throughout the exercise, building an information advantage task force embedded within Army Pacific headquarters.

The Army is taking the lessons it learned from that exercise to apply it to a similar task force in Europe that will support Army Europe and Africa — though, Fogarty said they aren’t trying to repeat the same model as the Pacific given it is a different theater. Rather, they want to be able to provide exactly what each theater needs.

“We said from the very beginning is we’re not trying to put the Pacific model in Europe, but we gained some relevant experience from the time we spent out in the Pacific,” he said. “That actually helped, I think, inform some of the options that we provided and some of the options that they selected. Then one of the things I think we’ve been really good at is this idea of build, assess, and then modify.”

Fogarty added they submitted several proposals to the Army that it is working its way through right now. 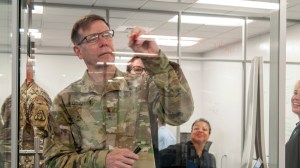