The Government Accountability Office has rejected a bid protest of the Defense Information Systems Agency’s (DISA) decision to award a mega contract to Leidos for a key Pentagon IT program.

GAO’s decision date was Wednesday, according to the watchdog.

In February, DISA issued a contract award worth up to $11.5 billion to Leidos for Defense Enclave Services, an effort to consolidate the networks of the department’s non-warfighting support agencies known as the “Fourth Estate.”

“GDIT challenges DISA’s conduct of discussions, technical evaluation, price evaluation, past performance evaluation, and the resulting tradeoff decision,” according to a source familiar with the protest who requested anonymity to discuss the situation.

GAO’s decision was expected no later than June 20. The protest is covered by a protective order, and the watchdog has not yet released a final redacted version of the decision.

Defense Enclave Services is a high priority for the Pentagon.

Under the indefinite-delivery, indefinite-quantity contract, which has a potential 10-year period of performance with a base ordering period that runs through February 2026 and three optional two-year periods to extend, Leidos was tasked to lead the Fourth Estate Network Optimization (4ENO) initiative — an effort to move 22 agencies and field activities to a single platform.

The new platform, called DoDNET, will house common IT elements like personnel, contracting and communications systems. Leidos was chosen to lead the management and operation of the greater network architecture and to be responsible for helping the agencies optimize their IT portfolios in the move over to the single platform.

“We are pleased the Government Accountability Office has affirmed the Defense Information Systems Agency’s award,” Gerry Fasano, Leidos Defense Group President, said in a statement. “Leidos is deeply committed to DISA’s critical mission, and never stopped preparing for the program’s success. Our robust and continuous preparation has positioned us to start delivering benefits to the user base on or ahead of current planned schedule, and we look forward to leveraging our decades of technological expertise to support mission success.”

GDIT and DISA declined to comment on the decision. 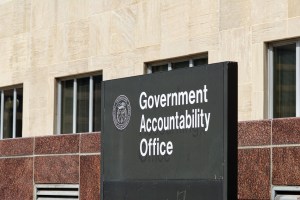