The Digital Accountability and Transparency Act of 2014 has already made an impact on government spending transparency, but there remain some kinks to be worked out to ensure that data reported to USAspending.gov is complete and accurate.

The DATA Act requires that federal agencies submit “accessible, consistent, reliable, and searchable data” for publication and use by policy makers and the public. It also requires that the Government Accountability Office independently assess the “timeliness, completeness, accuracy, and quality” of that data in a report to Congress.

So that’s precisely what the watchdog did — and while the data submitted was broadly found to be timely, there were some weaknesses in its completeness and accuracy.

For example the investigation found that, within the data submitted for the second quarter of fiscal year 2017, 160 financial assistance programs (an estimated $80 billion in spending) were not included in the data. Additionally, while budgetary data was found to be reasonably accurate, less that 1 percent of award data was accurate when comparing reported data with other “authoritative agency sources.”

GAO also found that while the Office of Management and Budget provides guidelines for agencies on how to define different data elements, agencies can and do interpret these guidelines differently. Further specification is needed, GAO said, to ensure “data consistency and comparability.”

Finally, the report argues that the Department of the Treasury website where all this spending data is displayed, Beta.USAspending.gov (which is currently under development but is supposed to become the sole source for this data this fall), “does not sufficiently disclose known limitations affecting data quality.”

“Without the transparent disclosure of known limitations, users may view, download, or use data made available on the site without full knowledge of the extent to which the data are timely, complete, or accurate, and therefore, could inadvertently draw inaccurate conclusions from the data,” the report states. “Disclosing data limitations does not detract from the value of the data reported under the DATA Act. Instead, it enhances its value by providing users with the information that they need to interpret and use the data appropriately to inform future decision making.”

So while the report acknowledges the “significant strides” that OMB, Treasury and the rest of the government has made in implementing the DATA Act, it concludes that there is still work ahead.

“Our audit of the initial data submitted by agencies and made available to the public on Treasury’s Beta.USAspending.gov website shows that much more needs to be done if the DATA Act’s promise of improving the accuracy and transparency of federal spending data is to be fully realized,” the report states.

The report concludes with six recommendations — two for OMB on clarifying agency guidelines, and four for Treasury on improved oversight and display of the data.

As another requirement of the law, agency inspector generals recently released their mandated audits of each agency’s DATA Act compliance. As the contents of the GAO report might suggests, the results are mixed. The data submitted by the Consumer Financial Protection Bureau, for example, was found to be “complete, timely, accurate, and of good quality.” Meanwhile, over at the Department of Housing and Urban Development, the IG “found widespread errors, inconsistencies, omissions and false values.” 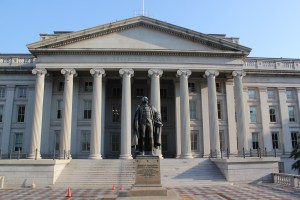