Who is the lawful leader of the Consumer Financial Protection Bureau?

Well, for a while there, in an unprecedented political standoff, we didn’t know — and still now we’re not even really sure.

When former Director Richard Cordray stepped down from the role in November, President Donald Trump picked his budget director Mick Mulvaney to take over. But Cordray also tapped his chief of staff, Leandra English, to fill the role in his absence. CFPB employees had no idea who to report to.

The tussle went to court and a U.S. District Court decided in favor of the president and Mulvaney. But English hasn’t backed down, filing an injunction to retain her appointment from her former boss.

In this episode of Gov Actually, hosts Dan Tangherlini and Danny Werfel are joined by Nani Coloretti, who helped stand up CFPB as its first chief operating officer. They discuss the creation of the office, how it’s structured and why it came to be in this political predicament.

“What [Richard Cordray] did was aggressive,” Tangherlini says. “The response was to meet aggression with aggression, in a way.” 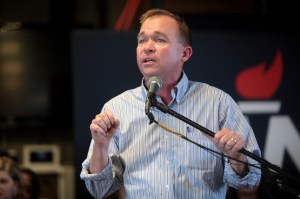