The General Services Administration wants to give federal personnel the opportunity to work from commercial coworking spaces instead of coming into the office.

GSA awarded a multi-award, indefinite-delivery, indefinite-quantity contract to five commercial co-working companies —WeWork, The Yard, LiquidSpace, Expansive and Deskpass — last month that will allow agencies to purchase flexible, temporary space from any of the companies.

The contract starts at one year and could go up to five, with a $10 million cap on spending with each of the five companies per year, according to terms of the procurement.

While the idea of such a contract makes sense now that the government has had to flex its teleworking muscle during the COVID-19 pandemic, GSA actually began planning it out in late 2019 before the coronavirus was really even known to be a threat to the U.S.

“Working beyond the confines of traditional government offices has become more common,” says a contract document from 2019. “Government employees are now commonly equipped with technological tools to work from anywhere. The freedom provided by technological advancements allows agencies to efficiently and flexibly pursue mission success through the utilization of employee mobility and telework.”

“The pandemic has fundamentally changed how work is approached, and now government agencies will have a tool to help employees succeed while saving costs,” WeWork CEO Sandeep Mathrani said in a statement. “The workplace of the future requires flexibility, and GSA should be applauded for innovating.” 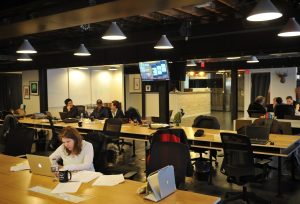