Just when it seemed the General Services Administration was ready to award commercial e-marketplace pilots, the agency revealed it is working through some agency-level protests that will delay the process.

Three separate businesses are asking GSA to reassess their proposals, according to Bill Zielinski, the assistant commissioner of the Office of Information Technology.

“It’s difficult to say exactly the window of time that it will take to work through the protests, but we do believe that it’s in a short window of time,” Zielinski said during a House Oversight subcommittee hearing Wednesday. “If not by the end of the month, shortly thereafter.”

Section 846 of the National Defense Authorization Act for fiscal 2018 directed GSA to explore the use of multiple e-commerce platforms for modernizing the purchase process for routine commercial items. It appeared that program was ready to keep rolling after Overstock.com withdrew a pre-award bid protest with the Government Accountability Office in late February without GSA making changes to its solicitation.

Amazon Business initially protested GSA’s solicitation at the agency level on Nov. 15, prompting the agency to revise requirements to be more performance-based in leveraging existing solutions.

GSA wants to issue guidance at the end of April launching e-commerce pilots for agency use. “Well above” a dozen agencies expressed interest in participating in the program, Zielinski said.

Correction: March 6, 2020. An original version of this story incorrectly stated Section 836 of the NDAA for fiscal 2018 directed GSA to explore e-commerce platforms for card transactions under the micro-purchase threshold. It was Section 846, and using the MPT was optional. 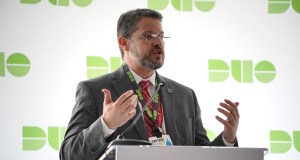