The General Services Administration tapped a tech executive with a background in blockchain and cloud computing to serve as a new regional chief.

“I’m very pleased to welcome Bruno to the GSA leadership team in the Northwest Arctic Region,” said GSA administrator Emily Murphy in a statement. “His experience as a reformer in business, government, and the military will be invaluable as we pursue efforts to reduce duplication, generate competition and increase agency transparency.”

The position had been previously held by Tiffany Hixson, who also serves as assistant commissioner of the Office of Professional Services & Human Capital Categories.

Agency officials confirmed that Hixson had stepped down from the regional director role, but would remain as an assistant commissioner. She came to the agency in 2011 after serving in the Department of Homeland Security for seven years.

Kelpsas comes from cloud and data analytics company Worldlink, where he worked on agile development projects for Samsung Research & Development, according to his LinkedIn profile.

He also served as NTT DATA Americas’ director of cybersecurity integration and delivery, and he worked on intranet systems at both the Navy/Marine Corps and the State Department in various contractor roles.

The move comes as GSA has also named Scott Anderson to manage its National Capital Region, and following several changes to the agency’s Technology Transformation Service.

Meanwhile, the Trump administration nominated two officials to senior acquisition roles in the Department of Defense.

Fahey, a former Department of Defense director of systems engineering and integration, will return to government after two years of serving as vice president of combat vehicles and armaments for defense consulting firm Cypress International.

Roper emerges from a role as director of the DoD’s Strategic Capabilities Office. He had previously served the Missile Defense Agency’s chief architect from 2010 to 2012. 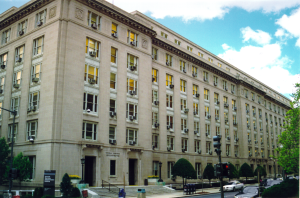