The CEO of the Partnership for Public Service has called for an expansion of cybersecurity internship programs, describing them as the “primary mechanism” for getting new talent into entry-level jobs at federal agencies.

“Our federal government needs to approach talent management as the best private sector organizations do,” said Max Stier, speaking at a congressional hearing on Thursday. “We think our student internship program is our primary mechanism for identifying talent for entry-level [cybersecurity] jobs.”

Thursday’s hearing was hosted as lawmakers debate the most effective way to foster a new generation of cybersecurity experts in government in response to the rise in cyberattacks on critical infrastructure. It follows also a memorandum from the Biden administration yesterday that will create new performance goals for federal agencies.

Converting internships into full-time, fully paid government positions is currently a laborious process and can leave candidates waiting for up to 100 days before receiving a job offer. Roles requiring security clearance often result in a longer delay for potential employees.

Stier said also that more granular metrics should be used to judge the success of departments in recruiting and retaining a broad range of candidates.

“The most senior leadership in government need to hold their teams accountable to make sure these numbers are good,” he said. “If they prioritize it themselves, you will see change.”

Among key challenges for federal agency cyber recruitment is the age of the workforce, which has fewer than 6% of staff under the age of 30.

In a conversation with FedScoop earlier this month, cloud technology experts identified the expansion of internships and partnerships with colleges and other institutions as key ways of tackling a lack of cloud talent.

The Partnership for Public Service is a D.C.-based nonprofit that is focused on improving how government agencies function. 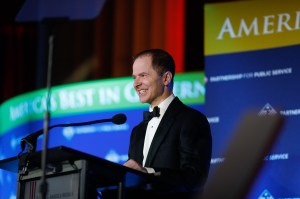