The Air Force’s new top civilian IT official, Lauren Knausenberger, sees the job as a direct extension of the work she was doing in her previous role as chief transformation officer.

Now as the service’s deputy CIO, Knausenberger said she will be focusing on modernizing cybersecurity practices and bringing new technology into the department — efforts she already was undertaking before she was tapped for the new role September following the retirement of Bill Marion.

“IT is the foundation on which we do everything else,” she said Tuesday during the Billington CyberSecurity Summit, her first public remarks since being tapped for the job.

She pointed to specific technologies that she wants develop on top of enterprise IT platforms, including artificial intelligence-enabled systems, the ability to host larger and more usable data sets, and a “sensor net,” or interoperable layer of data that can be read from multiple sensors.

Knausenberger also said she will continue to push for greater educational opportunities for airmen. The department recently launched a “Digital University” that provides free classes on technology for the force. Moving the Digital U from beta to fully launched program is a priority, she said.

Other workforce-related goals including expanding the use of robotic process automation (RPA) to reduce the menial tasks that need to be done by humans, and expanding access to the technology that has allowed for mass telework during the coronavirus pandemic.

The goal is to ensure “people have the tools they need to do their job,” Knausenberger said.

She sees a lot of power in offices like the software-development project Kessel Run and the AI team Platform One, which have managed to entice coders with Silicon Valley-style office cultures and remote work options.

“I think that is something a lot of folks don’t think about in government that could help a lot of people” she said. 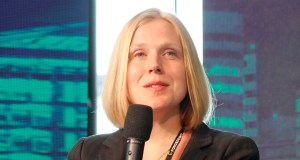