Lawmakers chairing two key House committees have called on the Department of Homeland Security Inspector General to step aside from the investigation into the deletion of cell phone messages relating to the Jan. 6 Capitol riot by the Secret Service.

In a letter Tuesday, Carolyn Maloney, D-NY and Bennie Thompson, D-MS, said Joseph Cuffari should recuse himself because he failed to notify Congress promptly that the Secret Service had refused for months to comply with the watchdog’s request for information relating to the attack.

“Inspector General Cuffari is required by law to ‘immediately’ report problems or abuses that are ‘particularly serious or flagrant.’ Yet, Inspector General Cuffari failed to provide adequate or timely notice that the Secret Service had refused for months to comply with DHS Office of Inspector General (OIG) requests for information related to the Jan. 6 attack and failed to notify Congress after DHS OIG learned that the Secret Service had erased text messages related to this matter,” the lawmakers wrote in the missive.

Instead, the lawmakers propose that the watchdog for inspectors general, the Council of the Inspectors General on Integrity and Efficiency, should appoint another IG to carry out the investigation.

The inspector general of the Department of Homeland Security, under which the Secret Service operates, sent a letter to Congress in early July to inform them that text messages sent by agents around the Jan. 6th Capitol attack incident had been deleted.

The Secret Service claimed the erasures were part of a long-planned “system migration,” but such actions have prompted a criminal investigation by DHS after agency investigators could only find one pertinent text message regarding Jan. 6 from over 20 agents that are subject to congressional subpeonas.

The text messages have become particularly significant after former Trump White House aide Cassidy Hutchinson highlighted during a House hearing that former President Donald Trump allegedly tried to wrestle control of a Secret Service vehicle in order to try and join his crowd of supporters at the U.S. Capitol on Jan. 6. 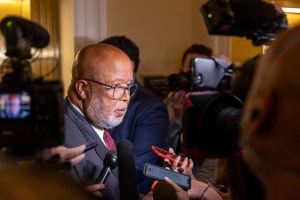 Lawmakers call on DHS watchdog to step aside from Jan. 6 Secret Service investigation