The Air Force‘s top general in charge of acquisition for space systems has retired, paving the way for the Space Force to stand up its own space procurement command.

Lt. Gen. John Thompson stepped down from the post of commander of the Space and Missile Systems Command (SMC) Tuesday, where he oversaw 6,300 personnel and $9 billion. The command will be dissolved and a new Space Systems Command will be established in its place to focus on developing and purchasing space technology. Pending Senate confirmation, the new command will be led by Space Force Maj. Gen. Michael Guetlein, who the president nominated in mid-July.

“Heading into this next chapter in space history, I look forward to the establishment and activation of the Space Systems Command and how that takes this organization, our processes and our people even further,” Thompson said.

He leaves after 36 years in uniform in the Air Force. Much of his career was spent in acquisition and logistics, including assignments at Air Force Material Command and the office of the Assistant Secretary of the Air Force for Acquisition, Technology and Logistics, according to a statement on his retirement.

“Whatever we do in support of the Department of Defense, it starts with developing and acquiring space capabilities. All of that is done here, under the stellar leadership of JT,” Chief of Space Operations Gen. John Raymond said at Thompson’s retirement ceremony.

If confirmed, Guetlein will be in charge of ongoing reform efforts within the Space Force’s acquisition structure. Some lawmakers have been frustrated with delays in the new branch’s plan, which many had hoped would adopt agile acquisition practices.

“The Space Force lacks a clear plan which defines its future space architecture and lacks a strategy for how this architecture will be acquired,” lawmakers wrote in a summary of the fiscal 2022 defense appropriations bill. 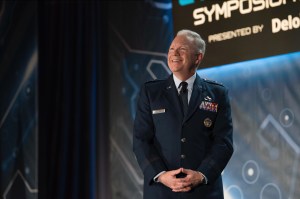