The Defense Information System Agency looks to be getting a new leader sometime soon.

If confirmed by the Senate, Skinner would also earn a rank promotion to lieutenant general.

Skinner currently serves as director of the J-6 Command, Control, Communications, and Cyber Directorate for the United States Indo-Pacific Command in Hawaii. In that role, he “is responsible for C4 across the largest regional combatant command enabling joint and coalition operations,” according to his bio.

Commissioned by the Air Force, Skinner has also spent time as commander of the 24th Air Force — the service’s component of the U.S. Cyber Command — prior to its redesignation under the 16th Air Force.

This wouldn’t be his first stint at DISA or JFHQ-DODIN — he spent time with the organizations as the chief of staff and the deputy commander, respectively.

In the dual-hatted role, Skinner would oversee DISA’s enterprise IT support for the Department of Defense globally, while also leading JFHQ-DODIN’s defense and operations of the Pentagon’s information networks.

The timeline for Skinner to replace Norton is unclear. When Norton was nominated to replace then-DISA head Lt. Gen. Alan Lynn in late 2017, it was three months before Lynn retired and Norton took over. DISA did not have information on the timing of the transition. 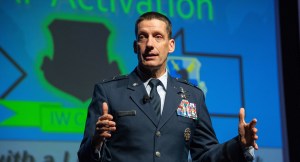