Lt. Gen. Robert Skinner of the Air Force replaced Norton at a change of command and directorship ceremony Friday.

Norton leaves at a critical time for DISA as it prepares to issue an $11 billion IT services contract, lead a major consolidation of support agency IT networks and continue investigating the SolarWinds hack. DISA will also maintain its own pivot to maximum telework and continue supporting DOD’s adoption of the Commercial Virtual Remote environment.

“We have done an amazing job,” she said during a virtual roundtable with reporters Thursday. “The thing that was most important, is how we have treated each other as people.”

Supporting the military’s shift to telework was not the first major crisis she steered DISA through. Under her watch, DISA was almost eliminated by Congress in 2018, a move she helped thwart. She said that “telling the DISA story” and increasing the transparency of the agency was what helped save it from the chopping block.

“It is pretty amazing if you think about what would have happened in 2020 if that had happened,” she said of the potential cutting of DISA’s funding.

Amid the response to a global pandemic, Norton also helped oversee the response to the recent SolarWinds breach. As commander of the Joint Forces Headquarters-Department of Defense Information Network, Norton leads the operation and protection of the military’s IT networks, which were targets of the suspected Russian hackers who led the larger cyberespionage campaign. DISA said it did not find any bad actors on DOD networks, but investigations remain ongoing.

Norton joined the Navy as an officer in 1986 and rose to become the first female director of DISA in 2018. While leading the DOD’s IT support agency, she pushed for more diversity and inclusion in the military technology community.

DISA’s plan to make itself the single service provider for defense support agencies, dubbed the Fourth Estate network optimization initiative (4ENO), is a massive undertaking involving technical consolidation, personnel shifts and workforce restructuring. With Norton at the helm, DISA broadened its mission with the project.

The process is already underway with the Defense Technical Information Center already transitioning help desk and IT personnel into DISA, Norton said. More migration is expected to happen under Skinner’s directorship.

A part of the migration will be the award of the Defense Services Enclave (DES) contract for a single vendor to help with the technical integration of disparate networks — a deal that’s worth up to $11 billion.

The contract will be an indefinite-delivery, indefinite-quantity vehicle with task orders issued for specific work. The agency anticipates a 10-year work period, but the contract will have an initial four-year base with three optional two-year extensions.

“The concept of making DISA the single service provider is really something new,” Norton said. “That is really exciting.” 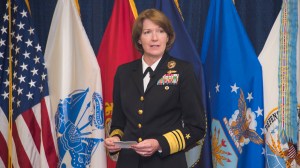