After Congress ran out the clock last year on a bill that would have codified the Presidential Innovation Fellows program, the House’s majority Leader reintroduced the legislation this week.

The program, which embeds private-sector innovators into federal agencies for a yearlong tour, launched in 2012 during the Obama administration. Fellows — known as PIFs — have contributed to major federal technology projects such as the launch of Data.gov, the Police Data Initiative, Blue Button and the RFP-EZ platform.

“Over the past several years, the PIF program has unquestionably demonstrated its unique ability to deliver tangible results for the American public,” Kevin McCarthy wrote in a LinkedIn post Thursday about the bill.

The legislation would firm up the program’s place in the government. President Barack Obama issued in 2015 an executive order in an attempt to make PIF more permanent.

The bill, known as the TALENT ACT, passed the House in July 2016, but a companion bill introduced in November languished in the Senate. McCarthy reintroduced the bill on Tuesday.

The bill is part of McCathy’s Innovation Initiative, which seeks to “advance policy solutions that will foster more private-sector innovation and job growth, by empowering entrepreneurs to pursue their dreams.”

Anyone is eligible to be a PIF, and the program primarily chooses people with tech backgrounds. As described on its website, many fellows “have significant experience and track records of delivering at a very high-level, are proven leaders, and innovative thinkers.”

As one example of PIF efforts, several fellows this year worked on a project with the Commerce Department and the White House’s Council on Women and Girls called Hack the Pay Gap, which was designed to “open up troves of census data at the intersection of income and gender” to encourage citizens to build tools to close the gender pay gap, Smita Satiani, then deputy director for the Presidential Innovation Fellows program, told FedScoop in July.

The tools created as a part of the initiative tackled everything from salary negotiation and the cost of goods based on wage inequality to how maternity leave affects the pay disparity.

McCarthy noted that due to the work of PIFs, “it is easier for veterans to find career options in the civilian workforce, government data has been made available for researchers and entrepreneurs, a new generation of innovators have discovered STEM education, and many other important projects.”

Many PIFs have stayed on with the federal government after their fellowship ended, taking innovative roles with agencies — many as part of the 18F team at the General Services Administration, which currently houses the Presidential Innovation Fellows program.

Indeed, McCarthy added that “the PIF program has demonstrated its ability to drive long-term cultural change within government.” Nearly one-third of fellows have assumed government leadership roles after participating in the program, he said. 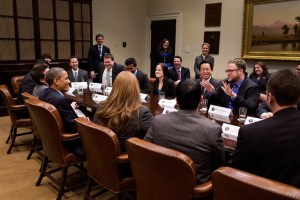 Effort to codify Presidential Innovation Fellows program is back in House