Think you’ve been scammed and are looking for help on USA.gov? “Sam” is here for you.

Sam is a new automated chatbot built by a small team at USA.gov that can answer basic consumer questions like “Is this a scam?” “Can I get my money back?” and more. Sam’s reach is limited thus far — intentionally so — in that it’s only available from three webpages on USA.gov. But for the team behind it, Sam is an exciting initial pilot with what could prove to be a powerful technological tool.

“At USA.gov, we get hundreds of questions every day from the public about government benefits and services,” Jessica Milcetich, product owner at USA.gov, told FedScoop in an interview. Traditionally, citizen users might contact a call center or chat with USA.gov on social media to resolve these issues. While these avenues are helpful and still available, Milcetich and team wanted to see if automation could provide “a new option.”

“We wanted to see if there was a way we could use automation to help us deliver more efficient and effective answers for our users,” she said. “Sam, the chatbot, is kind of our first test to use some of the advances in artificial intelligence to try to automate that question and answer process.” 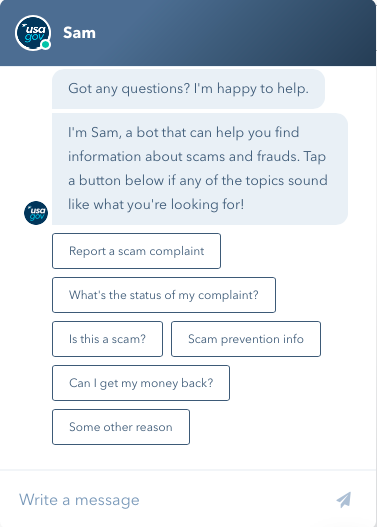 The cross-functional team that built Sam was “very, very intentional” about the bot’s narrow scope, Milcetich said — a scope that was crafted with the help of in-depth user research. The team interviewed 32 people (recruited via contact centers or on Facebook) about their experiences with and emotions about experiencing and reporting scams, then directed that information into the “logic flows” that Sam follows.

This design process “takes time,” Milcetich admitted, “but it’s so, so worth it.” The upfront investment in research made actually building the bot on Hubspot a quick process and, Milcetich argued, has been a huge factor in Sam’s early success.

Per USA.gov — which is run by the General Services Administration — Sam has seen over 4,000 users since it launched in February, and 78 percent of these user interactions have been “successful” — meaning that a user who started an interaction with Sam was able to get an answer. Milcetich said her team is “very happy” with this number.

The project has been noticed too — Sam is a finalist for the ACT-IAC Igniting Innovation awards in May.

Still, there remains much more Milcetich and team want to add to Sam. In future versions, she said, Sam will be bilingual and able to answer free-text questions about a broader range of USA.gov subjects.

Citizen-facing chatbots aren’t totally new to the federal government — the U.S. Citizenship and Immigration Service launched “Emma” in May 2017. “We are big fans of Emma,” Milcetich said. 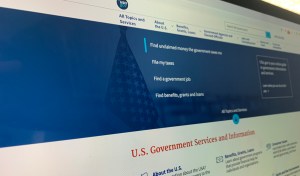