The Department of Defense continues to onboard more physicians and providers to its modernized electronic health record system, MHS GENESIS.

The DOD added 6,000 new users in its latest deployment of the EHR at medical centers in California, lead contractor Leidos announced Tuesday.

The latest wave of new users and centers with access to the technology brings the total to 20,000 users at 20 facilities across the Military Health Service (MHS) — a more than 30% increase.

The new EHR modernizes many of the interfaces for how medical workers interact with patient data and migrates the DOD’s health records to a Cerner Millennium cloud system. The program’s rollout saw some snags early in the pandemic but has since corrected course.

“Now more than ever our military needs the most advanced healthcare delivery system,” said Liz Porter, president of the Leidos Health Group, the lead contractor on the program. “We remain diligently focused on meeting the implementation schedule for this vital program and are proud of the team’s ability to continue delivering during these challenging times.”

Wave deployments of MHS GENESIS are taking place in specific regions across the U.S. and often take several months for completion. Full deployment of the system is expected by the end of 2023, according to Leidos. This latest wave of deployments is centered in southern California, an area with a sizable military presence.

The same Cerner tech is also being rolled out across the Department of Veterans Affairs‘ medical facilities. Eventually, the two systems will be interoperable, creating medical IT synergies to ease the transferring of health records when service members transition into retirement.

The VA’s rollout has faced several delays and earned negative attention from congressional watchdogs. In a recent audit, the Government Accountability Office recommended the VA pause deployment of its system while it takes stock of technical issues.

The MHS GENESIS system has not faced the same larger snags so far.

“The progress to date demonstrates our team’s focus and commitment to ensuring we have the right people in the right places to get this done,” Holly Joers, acting program executive officer for the Defense Healthcare Management Systems (PEO DHMS), said in Leidos’ statement. 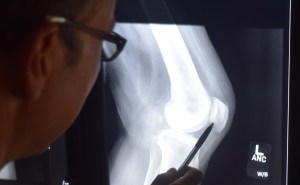