The Department of Defense is sending robotic ships to Ukraine to aid its fight against Russia. While the Pentagon is being tight-lipped about the vessels and what missions they’ll be performing, analysts gave FedScoop some insights into what the systems might be and what role they might play in the war.

A DOD fact sheet on the latest $800 million security assistance package announced Wednesday included an unspecified number of “unmanned coastal defense vessels” among the items being provided to the Ukrainians.

“Coast defense is something that Ukraine has repeatedly said they’re interested in,” Pentagon Press Secretary John Kirby told reporters after the arms package was announced. “It is particularly an acute need now, as we see the Russians really refocus their efforts on the east and in the south.”

Even after the loss of their Black Sea Fleet flagship Moskva, the Russians still have “quite a bit of naval capability available to them,” Kirby noted.

What DOD has revealed about the coastal defense vessels

“It’s an unmanned surface vessel (USV) that can be used for a variety of purposes in coastal defense. I think I’ll just leave it at that,” Kirby told reporters.

He said the systems are coming from Navy stocks.

When pressed for more details, Kirby said: “I’m not gonna promise you a fact sheet [but] I can promise you the damn thing works.”

Kirby was later asked if the systems will be armed.

“They’re designed to help Ukraine with its coastal defense needs. And I think I’m just going to leave it at that. I’m not going to get into the specific capabilities,” he said.

Kirby was also asked if the vessels will be coming from Navy prototype programs, when they are expected to arrive in Ukraine waters, and whether they are intended to attack Russian vessels.

“As I can get you more information about actual deliveries, we’ll do that. I’m just not in a position to do that. The authorization just came down yesterday. And we’re working very hard at sourcing these things and getting them on the way to Ukraine as quickly as possible,” he replied.

He continued: “I’m not going to talk about the specific capabilities of these USVs. I’ve talked about them to the degree that we’re going to go.”

A senior defense official, speaking to reporters on condition of anonymity, declined to say more about the system itself, but did note that some Ukrainian personnel have already been trained to use it.

FedScoop sent a list of questions to the Navy to try to learn more about the system, but a service spokesperson said they could not provide any of the information requested.

A spokesperson for the White House’s National Security Council referred FedScoop to the Pentagon.

While it’s unclear exactly how the Ukrainians will use the USVs, analysts told FedScoop there are several types of missions such vessels could conduct.

“There’s a wide variety of roles that unmanned surface systems could play, from helping to extend Ukraine’s surveillance out further and further away from its coastline, to potentially aiding in the targeting of Russian vessels, to helping to sweep Ukrainian waterways of mines if Russia goes that route,” said Peter W. Singer, a military technology expert and the author of Ghost Fleet, a novel that features USVs and other robotic systems.

“The more that you equip the Ukrainians to be able to defend their coastline, there’s a double benefit,” he said. “One, it pushes the Russian fleet back. Two, it frees up Ukrainian ground forces that might have had to have been deployed to defend coastline to operate elsewhere.”

The platforms could also potentially be used to directly attack Russian ships.

The ones being sent to Ukraine are likely designed for intelligence, surveillance and reconnaissance (ISR) and countermine operations, said Bryan Clark, director of the Center for Defense Concepts and Technology at the Hudson Institute.

Such weapons could potentially include small missiles that are essentially “guided rockets,” or machine guns. Alternatively, the Ukrainians could load the boats with explosives and ram them into Russian vessels like al-Qaida operatives did to the USS Cole in 2000, he said.

The Navy and other DOD agencies have been building and experimenting with a wide range of USVs, from commercial pleasure craft types of vessels to large platforms like the 132-foot-long Sea Hunter prototype built by defense contractor Leidos.

Analysts say the systems being shipped to Ukraine are most likely small platforms.

“They’ve got various prototype USVs that they’ve used for testing over the years … but the ones that they’ve bought, that they actually have a program of record around, is this small USV built by Textron” called the Common Unmanned Surface Vehicle (CUSV), Clark said.

The system is about 30-feet long, he said.

According to a Textron fact sheet, the CUSV is a “multi-mission and multi-payload capable vehicle with significant in-water experience” that can be used for mine weeping and neutralization, ISR, harbor security, monitoring or protection.

“I suspect that’s the one that’s been transferred, just because the other ones the U.S. has are all prototype vehicles of various kinds” and it’s unlikely the Pentagon would transfer a prototype to Ukraine, he added.

Brent Sadler, senior fellow for naval warfare and advanced technology at the Heritage Foundation, said the Mantas T-12, built by MARTAC, might be what’s headed to Ukraine, noting that Ukrainians were recently training at a Navy base in Little Creek, Virginia.

“When they say they’ve been trained [on the coastal defense vessels], that could have been in that training, because we’re talking small surface unmanned vessels that could be used for a variety of missions,” Sadler said.

The systems are 12-feet-long and have a maximum payload weight of 140 pounds, according to MARTAC.

The U.S. Navy’s Task Force 59, which has been testing unmanned tech, used the T-12 in an international exercise last year in the Central Command area of operations, Sadler noted.

“They’ve been tasked with integrating unmanned systems into port operations and security,” he said. “If there was a system that could be provided to Ukraine, it’s going to be something that was in that exercise, in my mind. And this Mantas T-12 comes to mind as an unmanned surface vessel.”

The impact on the war

The transfer of the unmanned coastal defense vessels isn’t likely to tip the balance in the Ukraine-Russia war, analysts say. Weapons like air-defense systems and anti-tank weapons are likely to have a bigger impact.

However, the move is not insignificant either.

“What this shows though is the fact that the U.S. is starting to diversify and widen the range of capabilities it’s providing to Ukraine, and also move into some more technologically sophisticated capabilities that, you know, represent what the U.S. military is on the cutting edge of developing,” Clark said.

He continued: “These USVs are like the newest technology that the U.S. Navy is developing for ISR and mine warfare. And so the fact that they’re going to share that with Ukraine is significant … from the psychological standpoint.”

The U.S. military might also benefit from the technology transfer, according to Sadler.

“What it does for the United States is it allows us to better refine how we [might] actually use these systems in combat, too. So we also learn and are able to benefit from the combat experience that the Ukrainians get from these and how they employ them. We learn a lot. So I think we also benefit by giving them this capability,” he said. 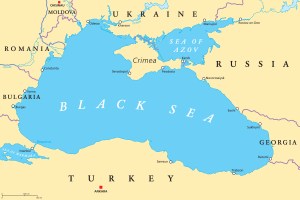