NASA’s new Office of Technology, Policy and Strategy will hire a chief technologist “as quickly as possible” within the rules to improve commercial partnerships, Associate Administrator Bhavya Lal told FedScoop on Tuesday.

Lal said she spent the afternoon with several chief technologists from NASA centers that her office supports, to better understand the agency’s technology challenges as she looks to hire a “rising star” who will report to her.

Conventionally NASA has recruited chief technologists from academia, often through the Intergovernment Personnel Act, which facilitates the temporary assignment of staff between the federal government and universities.

Lal wants to consider other avenues for finding the new appointee, including potentially tapping talent from Silicon Valley or from a venture capital fund.

“If we are trying to change culture at NASA, what better way than to bring in people from outside and get them to both learn and teach?” Lal said.

NASA has established “exceedingly productive,” milestone-based partnerships like the Commercial Orbital Transportation Services (COTS) and Commercial Crew programs, which have created a private market for space launches, she added.

Now the agency is trying to do the same thing for its Human Landing System (HLS) Program, while also improving how it partners with industry on technology development more broadly.

“There’s a general sense that NASA is not as good about infusing technology from outside,” Lal said. “We need to be better at working with the private sector.”

Lal’s office was born out of the merger of the offices of Strategic Engagement and Assessment and the Chief Technologist, which took place in October 2021. The merger was intended to improve the quality of advice that NASA’s leadership receives on how to technology should be used to accomplish its mission more effectively.

It took place after the Biden administration transition team noted a lack of centralized coordination when strategic planning and analysis was needed, that components remained stove-piped, and uneven information flow and misaligned decision structures. In short: NASA was neither as strategic nor systematic as intended.

Early focuses for the new office are supporting NASA’s moon-to-Mars strategy — not only Artemis program timelines but commercial partnerships supporting them — applying technology to the growing problem of space debris, highlighted by Russia‘s recent anti-satellite (ASAT) test; and replacing monolithic infrastructure and logistical architectures with modular, flexible ones.

Big-picture questions are part of the office’s job. For instance, the James Webb Space Telescope took 25 years and $11 billion to develop, but what if the next one is too big to launch and needs to be built in space? Wouldn’t it be more efficient to refuel Mars spacecraft in space?

Commercial partnerships will be key to building out a space superhighway, Lal said.

While it’s unclear if her office will be releasing strategic and action plans or just analyses upon request, it will work closely with the Exploration Systems Development, Space Operations, Science, and Space Technology mission directorates, she added.

The associate administrator wants to see the Office of Technology, Policy and Strategy institutionalized by NASA leadership.

“We just hope that current and future administrators would see the function we serve as an important one and continue to leverage the office,” Lal said. 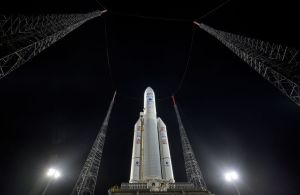 NASA to hire chief technologist who can improve commercial partnerships