A district court ruled that the National Security Commission on Artificial Intelligence must be more transparent in its work researching AI.

The congressionally mandated commission is comprised of current and former government and industry executives who receive government briefings and hold regular meetings. But according to the court, the commission has not complied with the Federal Advisory Committee Act in disclosing its work to the public.

The commission, co-chaired by former Deputy Secretary of Defense Robert Work and ex-Google CEO Eric Schmidt, is tasked by the fiscal 2019 National Defense Authorization Act with researching how AI will shape and impact the future of U.S. national security. It will ultimately deliver a final report to Congress in March 2021 before dissolving later that October.

The ruling, first reported by the blog Lawfare, was issued in June. The finding of the court came months after a similar suit found that the commission was not complying with the Freedom of Information Act and had to turn over relevant historical documents pertaining to the commission’s work. Both suits were brought by the Electronic Privacy Information Center (EPIC).

The NSCAI, however, has quickly worked to better broadcast its work to the public. “Since the District Court’s ruling, the Commission has filed a charter with Congress and the GSA to establish an advisory committee,” NSCAI spokesperson Tara Rigler said in an email. And on July 20, that committee will hold a virtual public meeting, which it announced publicly in the Federal Register.

The commission has produced an initial report and an interim report so far. In a separate series of quarterly recommendations, the commission recommended the U.S. federal government to double, and then double again, funding for basic research and development on AI. The commission has also weighed into the issue of whether China or the U.S. is ahead in the development and fielding of AI.

Recently, members of the commission have penned a series of white papers about how AI can play a role in response to the coronavirus pandemic.

Accusations of opaque dealings were leveled against a similar defense advisory commission, the Defense Innovation Board (DIB). While the DIB hosts many of its meetings in public, a 2019 ProPublica article quoted a whistleblower that accused the board of being used by private sector executives to sway the Defense Department work in non-transparent ways. 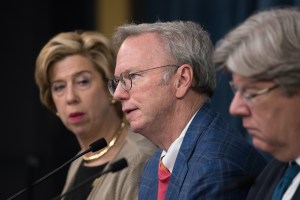