The president nominated Navy Adm. Christopher Grady to be the next No. 2 officer in the military, a powerful position that chairs several powerful acquisition and budgetary committees.

Grady would move from leading Navy Fleet Forces Command to the position if confirmed by the Senate. His duties would include leading the Joint Requirements Oversight Council, a committee of vice commanders of the military services that write military-wide requirements for system acquisitions.

Outgoing vice chairman, Air Force Gen. John Hyten, used his position to prioritize open data standards in joint requirements and tried to “inject speed” into DOD’s software acquisition system. Hyten was a major booster for tech-driven concepts like Joint All Domain Command and Control (JADC2) and used his position to work toward its implementation.

The vice chairman also co-chairs committees with the deputy secretary of defense that include the Deputy’s Management Action Group (DMAG). The DMAG sets budgetary priorities and now oversees a new steering group dedicated to promoting innovation with the DOD.

Like Hyten, Grady has experience at the military’s nuclear arm, U.S. Strategic Command. Where as Hyten brought additional experience in acquisition and space systems, Grady holds several degrees focusing on national security and has deployed several times to the Middle East to command combat ships and strike groups.

Hyten warned of only making “marginal” progress on speeding acquisition during his time in the job, despite it being a top priority of his. Hyten will retire on Nov. 20. There is likely to be a gap between when Grady could be nominated and when Hyten leaves due to the length confirmation process.

“Although we are making marginal progress, the Department of Defense is still unbelievably bureaucratic and slow,” Hyten told reporters in October. “It is still too slow,” he repeated.

It’s unclear what Grady’s priorities will be or how he will approach the job if confirmed. 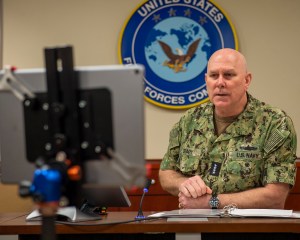 Navy admiral nominated to be next vice chairman of Joint Chiefs