Despite the recent progress made speeding up the Department of Defense‘s acquisition system, Gen. John Hyten, the military’s No. 2 general, told reporters Thursday that further changes are needed.

Speeding up acquisition was one of Hyten’s top priorities coming into the role of vice chairman of the Joint Chiefs of Staff, but he feels he’s made only “marginal” progress on that as he nears the end of his term.

Hyten, set to retire from the military Nov. 20, spoke on his regrets and achievements as one of the military’s top contracting, nuclear and space officers during a Defense Writers Group conversation with reporters. He admitted that during his two years as vice chairman, he was not able to achieve all that he had hoped and urged his successor to continue to push for better interoperability requirements and less centralization across the military to add speed to the acquisition process.

“Although we are making marginal progress, the Department of Defense is still unbelievably bureaucratic and slow,” Hyten told reporters. “It is still too slow,” he repeated.

Hyten’s successor has yet to be nominated by the president. The vice chairman of the Joint Chiefs is the chair of many of the DOD’s most powerful acquisition and technical committees, including the Joint Requirements Oversight Council (JROC) and the Deputy’s Management Action Group (DMAG). The committees control system requirements for acquisition and budgeting, respectively.

One area of the defense acquisition system Hyten noted as problematic is software procurement, describing it as a “nightmare” early in his term. Untangling the web of acquisition regulations that apply to software was one of Hyten’s top priorities while he chaired the JROC, he said. While Hyten didn’t say if that nightmare has gotten any better, he did say that rewrites of acquisition policy, including new software and “middle tier” pathways, were not enough.

Hyten also urged the next vice chairman to continue the fight for a more efficient acquisition system, primarily by writing joint requirements instead of rubber-stamping among the services. Joint requirements would apply across services to systems and increase interoperability, but he acknowledged they often irk the individual services that want to have agency over the specifications of their weapon systems.

“If we actually develop the joint requirements upfront … you actually don’t have to come back to us and ask ‘mother may I?’ all the time,” Hyten said.

During his term, Hyten signed joint requirements for data from platforms to be open and accessible to help develop training sets for artificial intelligence. He teased that another joint requirement for integrated air and missile defense was coming soon as well.

Hyten said he does take pride in what he called irreversible momentum on Joint All Domain Command and Control (JADC2), a high-tech framework of combining data from across the battlefield to give commanders deeper insight into operations from air, land, sea, space and cyberspace. Hyten said that he feels JADC2 is mission-critical and has enough push from the top of the Pentagon that it can’t be ignored or swallowed by the DOD’s bureaucracy.

“I think the Joint Warfighting Concept and JADC2 have enough momentum now that they are going to go forward,” he said. 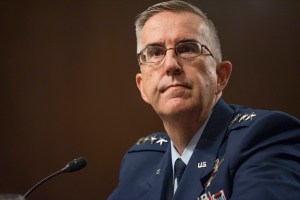 Military has only made ‘marginal’ gains in acquisition speed, Hyten says