If you asked CIO Aaron Weis a year ago about the Department of the Navy‘s biggest need for modernization, he would’ve told you it’s the network. But now, in the middle of a global pandemic, the service has quickly shifted priorities, placing cloud at the top of its list.

Despite the network being “foundational” to the Navy‘s IT needs and serving as the “central nervous system” to modernize on top of, “that network activity has shifted right” — meaning the timeline has been delayed — while the need for the cloud has become more pressing, he said.

“We have to look at how do we drive forward given where we’re at,” Weis said. “And so because of that reality, I believe the next step, and really an ideal kind of entry point here for modernization, is to shift to cloud.”

He said the Navy is “on the cusp” of releasing a “pretty comprehensive” cloud memo to guide migration across the department. That memo will “outline our approach between the Navy and Marine Corps how we’re going to leverage cloud capability, and that will form a pretty important set of guardrails that will help guide CIO and acquisition to go exercise capability.”

Ideally, the Navy would instead be focused on getting the network “tuned to the nines” and then build a cloud architecture out on top of that, Weis said. But with the urgent and prolonged move to telework during the pandemic, the need for enterprise cloud and cloud-enabled productivity applications has “shifted left.”

And now the Navy must figure out how to sustain that telework posture in the long-term. While the Department of Defense has provided the Microsoft Teams-based Commercial Virtual Remote (CVR) too during the pandemic — with some 200,000 sailors and Marines using it over the last seven months —it won’t be around forever.

Weis called that CVR platform a “pathfinder” for the Department of the Navy: “It’s shown us the potential value of it, it’s shown us the challenges of our architecture, it’s provided a forum to have a cybersecurity-based discussion around how we secure that, and it’s provided a launchpad to us having conversations based around zero trust. And that’s been a healthy iteration for us.”

But with DOD signaling that it will eventually scale down the operation of the CVR environment, the Navy is looking now at “how to build on that CVR experience to deploy the robust, end-state tools that we’re going to use going forward,” Weis said.

And there’s lots of room to build on that he said: “This is not just about, you know, mail and chat and sharing and collaboration activities. This is just an entry point. It’s an insertion point. And to use kind of a hacker term, this is where we enter and then we will move laterally based on that entry point” to new opportunities in the cloud.

So instead of modernizing the network and migrating to the cloud on top of that, the Navy is now pivoting to do the opposite.

“As we insert with cloud-enabled technology and move laterally, we will open a series of doors. And as we walk through those doors, we will march towards that cloud-enabled enterprise,” Weis said. “It will inform then the eventual network transformation that’s going to happen. And so there will be a natural segue into the network modernization.”

Weis said he sees the Navy at a major modernization inflection point because of these new shifts. “If we can find a way to exercise those — [a] shift left and shift right of enterprise cloud transition and the modernization of our network infrastructure — we will set the Navy and Marine Corps up for what I think will be a generational jump,” he said. “And it will allow those who follow us for years to come to really build on.”

Of course, with the Navy talking about the need to adopt cloud, it brings to mind DOD’s Microsoft-supported Joint Enterprise Defense Infrastructure (JEDI) cloud as a natural infrastructure to support that move. Despite the uncertainty of when JEDI will ever be operational as the acquisition is perpetually held up in legal disputes, Weis said he’s excited by the possibility of using it for the Navy at the tactical edge. 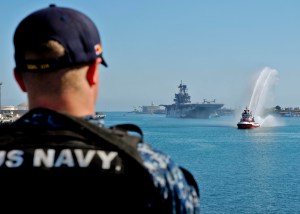