The Navy wants to more closely align space and cyberspace operations, given natural synergies between the two.

Space — to include communications and actions — is most often secured through cyberspace, he said, adding “one does not exist without the other, so that’s why it’s a marriage made in heaven.”

The Navy also designated Fleet Cyber/10th Fleet as the service component to space for U.S. Space Command, meaning Myers has responsibility for both cyber and space operations.

“This is in part due to the realization of the synergy and the force multiplier of cyber and space combination,” Myers said.

To set the foundation for creating tighter linkages, Myers said in his first year in the job, his top priority was striving for greater operational excellence, which he said involved getting teams to achieve better operational efficiency.

Now, 18 months into the job, his next priority is moving that operational excellence into integration with the combatant commands, both from a cyberspace and space perspective.

Within the cyber domain, Myers supports Indo-Pacific Command, Southern Command and U.S. Forces Korea. This is done through a construct known as Joint Force Headquarters-Cyber, which provides planning, targeting, intelligence and cyber capabilities to the combatant commands to which they’re assigned. The heads of the four service cyber components also lead their respective JFHQ-C and oversee the cyber teams that conduct operations for the combatant commands.

As the service component for space, he also supports Space Command with space assets. 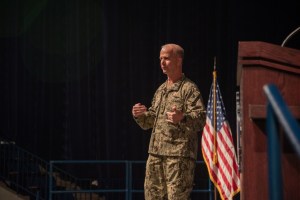